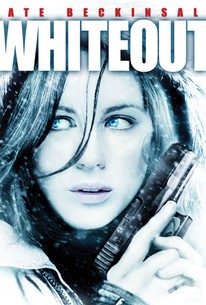 Critics Consensus: Kate Beckinsale is as lovely as ever, and does her best with the material, but moribund pacing and an uninspired plot leave Whiteout in the cold.

Critics Consensus: Kate Beckinsale is as lovely as ever, and does her best with the material, but moribund pacing and an uninspired plot leave Whiteout in the cold.

Critic Consensus: Kate Beckinsale is as lovely as ever, and does her best with the material, but moribund pacing and an uninspired plot leave Whiteout in the cold.

A U.S. marshall tracking a vicious murderer through the Antarctic must locate the killer before the sun sets for six months, or risk being trapped in the dark with the madman for months on end in director Dominic Sena's adaptation of the graphic novel series by Greg Rucka. U.S. marshall Carrie Stetko (Kate Beckinsale) has been stationed at Antarctica's South Pole research base for two years, and now after turning in her resignation she's looking forward to finally going home. The last plane out leaves in just three days, and just after that Antarctica will not see the sun again for another 24 weeks. Then, just 72 hours before she is set to escape the coming darkness, a body is discovered in the ice -- prompting the first murder investigation ever to take place on the desolate Antarctic Circle continent. Little does Carrie realize that she's suddenly been thrust into a mystery over 60 years in the making, and that the killer is ready to strike again in order to protect a grim secret. Now, as the death toll starts to rise, loyalties shift, and a massive series of whiteouts blow bitter winds across the frozen landscape, the U.S. marshall who wanted nothing more than to escape the cold must work around the clock to catch a killer before the blinding white snow gives way to the deadly darkness of winter.

Louis Dionne
as Man in Hall

Erin Hickock
as Rhonda
View All

Kate Beckinsale is about as convincing a U.S. Marshal as Joan Crawford is a loving mother.

It's Kate Beckinsale on Ice.

The film's slick and expensive looking but dumber than a dead penguin.

Where are the penguins?

But the screenplay is a massive jumble of nonsensical moments and ideas, while director Dominic Sena mishandles things so thoroughly finding the bits where things run smoothly is like finding a needle in a gigantic mountain of powdery snow.

As Kate Beckinsale trades fangs and skintight leather for parkas, she also leaves the entertainment value out in the cold.

Whiteout looks stunning but underneath that icy sheen it's an utter damp squib of a film.

It's a shame to see Beckinsale reduced to this, with the camera leering over her body as she showers in a sleazily transparent (and altogether useless) exploitation of her sexuality.

Gallons of the titular correction fluid may have helped Dominic Sena's abysmal thriller if it had been applied at just about any juncture during the graphic novel-to-feature film script stage.

When the snow starts blowing, it's impossible to tell who's who and what's what. Maybe parkas should be color-coded.

Well this seems to have been panned by the critics. Seems a few got the wrong idea and thought this was going to be like The Thing not sure why? ok it's no oscar winner, but it has an original setting for a whodunit thriller. Some of the actions scenes are hard to make out but that was the effect they went for. Overall it's not that bad, it has a twist or two and some action scenes to satisfy most people.

An ok horror thriller with some cool Arctic shots but nothing new and very predictable.

Been waiting to see this for awhile now and thinking the story and idea sounded great.Well what can i say it really never got going and the lack of a really good mystery so lets it down.Even the performances are abit wooded. You so expect more from starss like beckinsale and sterritt who are both favs of mine.And to top off the whole movie is the so bad twist at the end and climax just seem limp. A Very Disappointed Movie maybe not one to avoided but maybe one to have a few beers before viewing.

I love Kate Beckinsale in almost anything. . this though well .. left me wanting. Not the best murder mystery out there and it showed. The cast was decent but seemed to lack any kid of ummph. I think the source material and or the script just didnt give them much to work with and the end result was kinda plain. Apparently this was a graphic novel which I have not read. The movies visuals though were pretty stunning. . 3d CG and all. Just looked like a very harsh place to be.