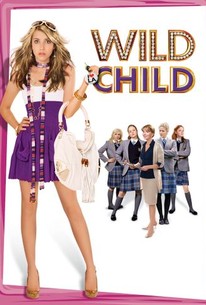 Sixteen-year-old Poppy is a self-obsessed, incorrigible brat who lives a pampered life in her L.A. world. Although she's handed credit cards with unlimited balances and surrounded by countless hangers on, Poppy can't escape the mounting frustration she feels with her family situation. And she makes sure that everyone knows it. After an over-the-top prank pushes her father one step too far, Poppy is shipped off to an English boarding school. Finding herself in a foreign world of early curfews, stern matrons and mandatory lacrosse, the American princess has finally met her match: a school of British girls who won't tolerate her spoiled ways. Under the watchful eye of the school's headmistress and surrounded by a new circle of friends, Poppy begrudgingly realizes her bad-girl behavior will only get her so far. But just because she must grow into a fine young lady doesn't mean this "wild child" won't be spending every waking hour shaking up a very proper system.

Lexi Ainsworth
as Molly
View All

The screenplay by Lucy Dahl (daughter of Roald) dwells unpleasantly on cruelty and humiliation, and finally Poppy does little more than exchange one form of snobbery for another.

It's an unoriginal story but one with potential, and the actors who play Poppy's school chums are lively company.

It may be manna for teen girls but any kind of critical eye will find it about as convincingly made as the last St Trinian's movie. It is played, though, with lively abandon.

Alex Pettyfer is even more wooden than he was in Stormbreaker - for heaven's sake, he's not even that good-looking. And the story's utter tosh.

Surely school should be more fun than this.

What begins as tedious teen comedy/drama about a Californian brat turns out to be a surprisingly agreeable popcorn flick.

The film has an energy and honesty about it: it's lively, funny and smart and the characters are appealing

Suprisingly good film considering the 'mild' teen films that we have around today. I'd agree with the name of the film, the main word being 'wild' as it's not afraid to mention things such as sex or alcohol. Comedic in some scenes and Emma Roberts and Alex Pettyfer have good chemistry. Although predictable, it's not awful and I'd consider this one of my guilty pleasures.

New Girl. New School. New Rules. The movie clearly is a chick flick azn girls only but I enjoyed it anyways been a guy and all, it entertain me to say the least. The story was nice and has a nice message to it. I see Emma Roberts been a great actress someday she's so adorable and likable but for now she's doing some work of her age and not typically great movies but that's ok because you gotta start somewhere. Sixteen-year-old Poppy Moore (Emma Roberts) has always got what she wanted and lives a pampered life in her L.A. world. Though she's handed credit cards with unlimited balances and surrounded by countless hangers on, Poppy can't escape the mounting frustration she feels with her family situation and she makes sure everyone knows it. After an over-the-top prank pushes her father (Aidan Quinn) one step too far, Poppy is shipped off to an England/English boarding school. Finding herself in a foreign world of early curfews, stern matrons, and mandatory lacrosse, the United States|American princess has finally met her match: a school of British girls who won't tolerate her rebellious ways. Under the watchful eye of the school's headmistress (Natasha Richardson) and surrounded by a new circle of friends (Josie, Kate, KiKi & Drippy), Poppy begrudgingly realises her bad-girl behavior will only get her so far. But just because she must grow into a fine young lady doesn't mean this Wild Child won't be spending every waking hour shaking up a very proper system. Poppy Moore starts Abbey Mount as she means to go on-her way,or no way. Realising her Dad's not coming back to get her, and having nowhere to fit in, room-mate Kate tells Poppy she'll have to get herself expelled. Later that night, Poppy reads a book (Alice In Wonderland - her punishment for fighting) with a lighter when her room-mates sneak up on her with torches, and offer their help. They give their ideas on how she can get expelled, and act on them as a group, and let her take the blame. This brings the girls closer, but Poppy still wants to leave. When none of the plans to get Poppy expelled are working the girls realise they will have to go all out and hit the headmistress closer to home by snogging her son Freddie, which is completely forbidden by the school. After some flirting, Freddie asks Poppy out on a date, during which they kiss. Before going out with Freddie, Poppy is so excited she doesn't log off the computer, and runs off. Harriet takes her revenge on Poppy by rewriting her emails to best friend Ruby, and sticks one on the girls' door, suggesting that Poppy is just using them and is faking the friendship. Harriet also rewrites an email about Freddie, stating Poppy's plan to kiss him only to get expelled and that she thinks he is a loser. Coming back from her night out, Poppy is ready to confess she's actually happy, to find the girls upset. They read the email to her and leave. Upset, Poppy goes to see Freddie but he has found the email about him also and feels betrayed. Poppy, with no one else to turn to, sneaks down to the cook's room to use the phone and rings Ruby, who it turns out is sleeping. Even more alone, Poppy starts playing with her lighter, setting a curtain alight. Hearing footsteps, she quickly puts out the fire and runs off. A few minutes later, she looks out her window to see a fire, and wakes Kate and the rest of the school. After the fire is put out, Freddie looks at the damage and finds her lighter. He gives it back to her, refusing to listen to what happened. Poppy goes to the headmistress and confesses. Poppy also asks Mrs. Kingsley to give a letter to Freddie apologizing and confessing her feelings about everything. While waiting for the Honour Court which will decide if she should be expelled, she finds a picture of her Mum and the lacrosse team. Poppy sits with the picture when Freddie finds her crying. After a heart to heart, they are friends again. At the Honour Court, Poppy tells her story while her room-mates find out Poppy was out with Freddie when the email was sent, and Harriet was the only one around. Going to the court,they get the whole school to confess they were present at the fire. Harriet then lets slip about Poppy's lighter being used to start the fire, which only Poppy and Freddie knew about, and accidentally confesses to restarting the fire after Poppy successfully put it out. Poppy is innocent. The movie is left off where Harriet is expelled, and Poppy will remain at Abbey Mount.