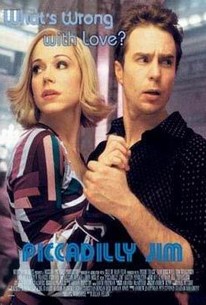 Jim Crocker (Sam Rockwell) is an American ne'er-do-well living in England with his tolerant father, Bingley (Tom Wilkinson), and his snooty, social-climbing stepmother, Eugenia (Allison Janney). As the film opens, Jim has been fouling up Eugenia's efforts to obtain a peerage with his all-too-public drinking, carousing, and fighting. He's lived there ever since he lost his job writing a society column for a newspaper in New York. Due to his notoriety, the newspaper has continued running a column under his byline, "Piccadilly Jim," though he no longer writes it. He's fairly content in his debauchery until he runs into the comparatively refined Ann (Frances O'Connor), who, as it turns out, is the niece of Eugenia's sister and chief rival, Nesta (Brenda Blethyn). Jim is eager to meet Ann until he learns that she already hates Piccadilly Jim without having met him. Jim hatches an elaborate plot to win Ann's heart, posing as the upright son of his own butler, and traveling to America to stay with Nesta and her family, including her husband (and Ann's beloved uncle Peter [Austin Pendleton]), their obnoxious young son Ogden, and Ann and her potential fiancé, Reggie (Hugh Bonneville). As he sets out to win Ann's heart, Jim is shocked to discover that several other residents of the house are there under false pretenses, including his own father. Piccadilly Jim was adapted from P.G. Wodehouse's novel by Julian Fellowes (Gosford Park) and directed by John McKay (Crush). The film had its world premiere at the 2005 Tribeca Film Festival. ~ Josh Ralske, Rovi

Delia Lindsay
as Duchess of Arminster

A rather hysterical oddity.

Everyone is having an identity crisis in Piccadilly Jim. The characters are all overdone, but that is part of the charm of Julian Fellowes' adaptation of P.G. Wodehouse's novel.

There are no featured audience reviews yet. Click the link below to see what others say about Piccadilly Jim!