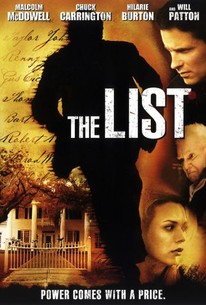 A Charlotte lawyer unearths a closely guarded family secret when his father dies and leaves him interest in an obscure entity known as The Covenant List of South Carolina, Ltd. in director Gary Wheeler's adaptation of the novel by author Robert Whitlow. Convinced that the fall of the Confederacy is at hand after the Battle of Gettysburg, a group of South Carolina plantation owners gather at the Rice Planter's Inn in Georgetown, South Carolina and hatch a plan to smuggle their fortunes into Europe. Their cover for the operation: a secret society dubbed The Covenant List of South Carolina, Ltd. But a weathered prophet opposes the group's nefarious plan, and issues a dire warning to his friends and neighbors that one day the descendents of the group will one day face judgment at the mighty hand of God. Decades later, the interests of the families have been passed down through the generations. The profit margin has exploded, and with each passing year the secret grows more sinister. When Charlotte lawyer Renny Jacobson learns that his father has recently passed away, he returns to Charleston to pay his final respects and attend the reading of the family will. Much to Renny's surprise, his father bequeathed a large portion of his estate to charity. Shortly after discovering that his sole inheritance is an interest in the mysterious Covenant List of South Carolina, Ltd., Renny is contacted by The List and approached by a beautiful woman named Jo Johnston. In the following days Renny will become swept up by a whirlwind of deception and greed that will lead him from the picturesque coasts of South Carolina to the closely guarded Swiss bank vaults which house a vast fortune in cursed blood money. ~ Jason Buchanan, Rovi

Will Patton
as Harriston

Elizabeth Omilami
as Mama A

Once it gets to the point, the whole thing falls apart.

Too easy, too cozy and too self-righteous. In the end, the film's own commitment to its message feels phony.

The List is an accomplished piece of filmmaking with a serious goal.

Had high hopes for it, but wasn't as good as I had hoped.