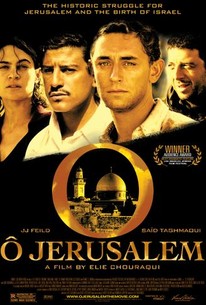 Critics Consensus: Though a noble effort, O Jerusalem fails to combine this history lesson and human drama into a coherent cinematic piece.

Critics Consensus: Though a noble effort, O Jerusalem fails to combine this history lesson and human drama into a coherent cinematic piece.

Critic Consensus: Though a noble effort, O Jerusalem fails to combine this history lesson and human drama into a coherent cinematic piece.

Alternating between the unique vantage points of the Jews, the Arabs, and the British, director Elie Chouraqui's historical drama re-creates the landmark struggle surrounding the creation of the State of Israel in 1948. From the concrete jungle of New York City to the desert paradise of the Holy Land, two young Americans -- one Jewish and the other Arab -- are forced to make an incredible series of life-altering sacrifices in order to fight for their dreams. As the struggle for control of Jerusalem gets under way, the Jews, Arabs, and Brits must all address such difficult issues as terrorism, politics, courage, and deprivation with a newfound sense of honesty and urgency. Drawing inspiration from authors Larry Collins and Dominique Lapierre's best-selling novel of the same name, O Jerusalem offers a textured commentary on a conflict that continues to stir controversy in the 21st century.

Critical Consensus: Life Has Its Ups And Downs, Darjeeling Is Transporting

The filmmakers split time between history and personal drama in ways that do full service to neither.

In trying to be sensitive to such a controversial issue, O Jerusalem glazes over important events settling for mediocrity while giving a history lesson more appropriate for high school.

It aspires to be an epic drama but suffers from an acute identity crisis: It can't decide if it wants to be history, drama, or a cry for peace in the Mideast.

It's hard to take the film seriously with [its] contrivances, including a hokey music score, dialogue designed solely to give us historical information.

Director Elie Chouraqui and co-writer Didier Lepecheur [fall] prey to a fatal evenhandedness that reduces a complex battle for the loveliest, most fought-over city in the world to a pile of heroic clichés.

O Jerusalem is as overstated and expository as a historical pageant, from the drippy music to a sputtering, running gag involving funky old jalopies to clichéd speeches and teary-eyed deaths and a final voice-over crying out for peace.

I felt as though I could have gathered the same information about Israel's beginnings from a pamphlet, and saved myself the film's forthright baggage

A hopeful and helpful movie that depicts the friendship between a Jew and an Arab that outlasts the winds of war and the culture of revenge and racial hatred surrounding them.

The need to touch on pivotal events makes this at times seem like history's 'greatest hits,' although the personal stories provide a narrative thread tying it all together.

As a history lesson, the film is so elementary and silly that you'd half-expect to find Mr. Peabody and Sherman peeking around the Wailing Wall.

Such fictionalizations are the stuff of TV miniseries, and only serve to add confusion and melodrama to a history that, as Collins and Lapierre's book proves, hardly needs further dramatization.

Decent movie. Nothing spectacular, though...

An interesting depiction based upon the book (also titled 'O Jerusalem') that centralizes upon events that led to the rise of the statehood of Israel. Great cast- Said Taghmaoui, J.J. Field, Mel Raido, Maria Papas, Patrick Bruel, and Ian Holm. Worthy!