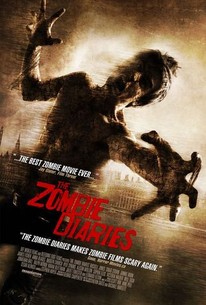 In the early part of the 21st Century, an unknown virus began spreading among the populace. Within weeks it had engulfed the entire planet, from the smallest rural communities to the greatest cities. Upon the death of its host, the virus would reanimate the corpse until it was no longer able to support itself. Soon, the planet was infested with a new threat - the undead. So begins our journey into the dystopian world of The Zombie Diaries. Three compelling video diaries chart the early days of the plague, right through to the last days of the apocalypse... -- (C) Official Site

Will Tosh
as James

News & Interviews for The Zombie Diaries

View All The Zombie Diaries News

Critic Reviews for The Zombie Diaries

If there ever was a movie that proves mockumentaries are not easy to make, it's this one.

A mildly diverting experiment that will appeal to only the staunchest of zombie aficionados.

What at first seems a refreshing verite take on the whole zombie genre soon imports problems of its own.

Audience Reviews for The Zombie Diaries

A completely handheld zombie movie that I like. How often does someone who so much hates the handheld horror style and is so critical of anything zombie movie remotely like a movie done this way? Not since "Diary of the Dead". [REC] did NOT meet my standards by any means. I might get accused of bias towards slow zombies and non-linear storytelling, but both of those things, done right, makes for a better film than a decent linear verite with fast zombies. Leave full real-time verite for serial killer movies, and fast zombies for cheap-o apocalyptic scifi thrillers or horror genre parodies.

There are cooler zombie shots in this than in "Diary of the Dead". Obviously the closeups of Diary were better, but the hordes in this scare and shock like the original "Night". This movie has one of the best nightshot scenes in horror film (when the farm-camp becomes unraveled), definitely the best indie work I've seen (yeah, I like the angle and orchestration **way** better than the ending of "Blair Witch").
For zombie lovers, a must see that captures the strangeness and insanity of surviving in a zombie world. Don't know why they're re-making [REC] into Quarantine instead of just putting this movie, as is, out in American theatres ('tis a British film).

That's another one for the (pseudo-docu horror) fire. It starts off slow yet strong but when night approaches the camera get shakier and the light sources suck (a weak flashlight or the "night vision" mode) which makes for annoying confusion. Oh well, at least the cute one survives this time.

An interesting premise doesn't inherently transform into a compelling film. While the way it treats its subject may be more realistic than most, it also takes some of the enjoyment out of it. It made me want to watch Cloverfield again, an example of how to do this sort of thing right.

This cross between "Blair Witch" and "28 Days Later". While I did feel that most of the story(s) were sort of "re-hashed" versions of tales previously told...they were told here in a very interesting way. For what it is (a low budget horror film), it was pretty damned good.