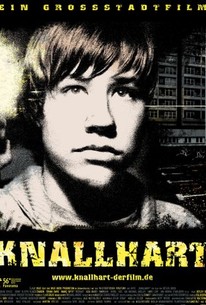 As written and directed by Detlev Buck, the inner-city character drama Tough Enough opens on 15-year-old Michael Polischka (David Kross), who lives with his single, white trash mom, Miriam (Jenny Elvers-Elbertzhagen and her wealthy physician lover, Klaus (Jan Henrik Stahlberg) in an affluent German suburb. After Miriam and Klaus have a bitter quarrel, mother and son are thrown out onto their ear, and must move to Neukoelln, a gritty ghetto in the eastern section of Berlin rife with illegal Turkish immigrants. Michael experiences a brush or two with the law by falling in with a pack of juvenile delinquents, including Crille (Arnel Taci) and his brother Matze (Kai Michael Mueller) , who (on a darkly humorous note) collectively gain revenge on Klaus by breaking into his home and robbing him blind. Circumstances take a decidedly nastier turn, however, when Michael falls prey to the wheedling of thug Hamal (Erhan Emre) and agrees to go to work as a drug runner.

A grainy piece of Berlin realism by Detlev Buck which follows a 15-year-old boy caught between a rock and a hard place.

A tragic cycle, persuasively rendered in a movie that's neatly achieved, if small in scale.

Director Detlev Buck may be well versed in comedies but he manages to pull off a neat little drama thanks to some credible performances.

It's Tadzio versus Rasputin, with a climax containing some gut-wrenching blonde justice.

A matter-of-fact socio-realist style and some strong central performances making this a shocking German drama.

Done no favours by its camera-phone aesthetic, Tough Enough doesn't have much of a sell-by date.

The inevitably brutal denouement provides a satisfactory close to a smartly observed and exhilarating movie.

Uses the familiar with enough flair and technical swagger to make it exciting all over again.

This German drama about a boy moving to a pretty bad part of Berlin with his mum is trying hard to give a realistic look at the current situation of poor parts of larger cities, where kids have little perspective or motivation and parents are not much of a good example either. The acting is excellent, newcomer David Kross even moved on to shoot with Kate Winslett. The story comes up with several gut wrenching and gloomy situations, most of which could easily happen, but doesn't entirely manage to avoid stereotypes (bullies, drugs, organized crime). Maybe because that's just how it is these days. Kudos to the movie for not being entirely pessimistic or depressing but realistic and dark enough to leave a knot in your stomach when the end credits roll. That's uncomfortable, realistic film making, no popcorn entertainment. Great soundtrack, too.