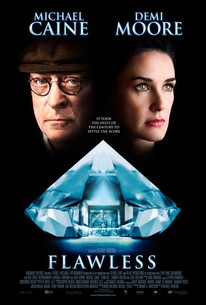 Michael Radford (Il Postino and The Merchant of Venice) directs screenwriter Edward Anderson's script about an aging janitor and an American executive who form an unlikely alliance in order to carry out an elaborate jewel heist. Set in 1960s-era London, the tense crime thriller stars Michael Caine as the scheming maintenance man who longs to relieve his employers at the London Diamond Corporation of their valuable inventory, and Demi Moore as the savvy executive who is completely perplexed by the wealthy diamond magnates. ~ Jason Buchanan, Rovi

Natalie Dormer
as Cassie
View All

There's little by way of thrills. Still, as a caper with a great cast and clever premise, Flawless works, despite its, um, flaws.

The problem is that as heist movies go this is about as captivating as watching someone dodge a bus fare. Almost everything about the film is second-rate: the direction, the plotting, the intrusive modernist production design.

You will need a very sweet tooth for this kind of thing, and, to be quite frank, the heist itself is not dramatised all that excitingly or clearly. But I quite like thrillers featuring enormous circular vault doors.

Calling a diamond-heist movie Flawless is a valiant choice - especially when it's anything but. Suspense is essential to this genre, but here you couldn't care less what happens next.

Demi Moore will do as the ghost of Hollywood past, rattling her jewelled accessories like a drag-queen Jacob Marley.

It's Caine's old-timer who provides the acting sparkle. Flawless may not be a perfect gem, but thanks to Caine it's definitely not paste.

The bad pacing and strange infatuation with Moore smoking and wearing high heels results in a picture that lacks snap and labours slowly through the plot twists.

A mopey character study only half-convincingly tricked out as a heist thriller.

Ignore the dull framing device and this is a watchable period crime drama. Pity about the dull, oft-used title though.

"Hang on lads, I've got a great idea..." said Michael Caine at the end of The Italian Job. Presumably he didn't mean waiting 40 years before pulling off a caper that wouldn't blow the bloody doors off a rabbit hutch.

Diamonds aren't forever in this sluggish heist caper from Michael Radford that partners Michael Caine and Demi Moore for the first time since 1984's Blame It On Rio.

In 1960's London two disgruntled employees for the world's main diamond retailer plan to rob it: a heist movie. The two characters, in an unusual and unlikely pairing, are Michael Caine and Demi Moore, from different societal stratums, and watching them find a way to work together, their chemistry is what makes this interesting film-making.

Demi Moore is never allowed to do an accent again. The script may account for some of the inconsistencies by remarking that she's a expatriated American, but such excuses can only go so far. The film is about disgruntled employees of a diamond company organizing a heist. There are a few moments when we're drawn in by the slickness of the plan, but there is little mystery beyond the logistics. We know Hobbs's motivations early on, and if this is where the film attempts to extract suspense, I didn't see it. Likewise, points about gender inequality and colonial pillaging seem tacked on. It is not as though this film leverages heist genre conventions in order to make a sociological point; rather, it is as though on the way to the set, the filmmakers realized that they should. Overall, though Michael Caine is always slick and fun to watch, the script fails to either pull itself together or keep us on the edge of our seat.

Not the best Michael Caine Film that?s out there but still its worth watching. About a robbery in 1969 of a Diamond Thief from the London Diamond Exchange. Demi Moore teams up with Michael Caine to pull off this heist. 3 1/2 stars.

its an okay movie, i like the concept and the stry isnt obvious so it does keep you wondering but it just doesnt entertain you for very long and it gets a little boring! i liked the ending and the way the story was portrayed but it was a little borimg!