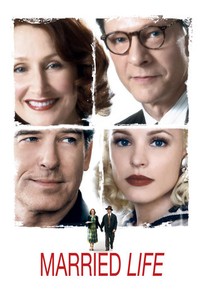 Critics Consensus: Married Life has excellent performances and flashes of dark wit, but it suffers from tonal shifts and uneven pacing.

Critics Consensus: Married Life has excellent performances and flashes of dark wit, but it suffers from tonal shifts and uneven pacing.

Critic Consensus: Married Life has excellent performances and flashes of dark wit, but it suffers from tonal shifts and uneven pacing.

A very gentle middle-aged man is married, but when he falls in love with another woman, he decides that to divorce his wife will be to humiliate her too much. So instead he decides to kill her.

Critics Consensus: 10,000 B.C. is Primitive; Bank Gets the Job Done

One of the more ethically dubious films to come out of Hollywood in years.

It's a good cast, with Cooper outstanding, but Sachs's direction is stodgy and the screenplay is grindingly self-conscious.

The movie is determinedly low-key, but honest, with a wrenching break-up scene, sharp work from Clarkson, and a final thought that lingers, about never really knowing what your other half is thinking.

The layers of deception are as meticulously constructed as the impeccable 1940s production and costume design. Unfortunately, the film doesn't maintain that distinctive noir cruelty, as hard as red lacquered finger nails.

It looks beautiful, and the convoluted plotting is initially the right side of Hitchcock pastiche, but the central conundrum is teased out over so many twists and false climaxes that ultimately it's a shrug, not a shock, which greets the denouement.

Failing to orient itself in any way, it becomes a vacuum, a rote recitation of the mechanics of the murder plot.

The United States' well-off middle class of the 1950s, its taboos, stereotypes and lifestyles, are reflected in this interesting and harsh film. [Full review in Spanish]

The roundelay structure and Hitchcockian nods could have easily given way to a sardonic puppet theater, but Sachs and screenwriter Oren Moverman care too much about their characters to turn them into pawns

This darkly comic dramatic thriller, which is set just after World War II, is more than merely watchable. It's very smart and is old-fashioned in several respects.

It is as though filmmaker Ira Sachs fears that just making a film about infidelity is too straight, too pedestrian, so, he's got to introduce the possibility that murder is on the horizon.

Even movies that dare to paint dark portraits of the sacred institution can't resist glorifying it in the end.

Good, but expected it to be better. End just felt a bit flat to me. However, very nice to look at, and cast all good - kind of like of like one of the old film noir movies. Just would have liked a little more to it.

The characters are rich and the acting excellent, but nothing in this subdued little thriller really seems to stick. As a chamber drama or a little sociological portrait of infidelity of the upper-middle class, Married Life does the trick, but aren't there a million other movies like this? There's nothing fundamentally that sets this apart from the scores of other movies about barely-restrained marital dissatisfaction. I mean, why give this a second when Far From Heaven is sitting there, an infinitely richer and more original exploration of similar themes? I don't mean to discredit the successes of Married Life; as I sat through it, it disarmed me with its surprising compassion toward its characters and the mature interpretations from the performers channeling them. Perhaps the quality that DOES make this movie stand out is an attempt to place a desperately unlikable protagonist in front of us and ask us to forgive and understand him. The one problem here is that Chris Cooper is simply irredeemable, as hard as the movie tries. The attempts at drawing sympathy for his situation are admirable and ambitious, but they simply fall short - it is extremely difficult to vindicate such repulsive actions without seeming overly manipulative, and though Married Life nobly attempts a quieter justification, it isn't enough. The only other surprise Married Life has up its sleeve is a fantastic performance by Rachel McAdams. We fully expect Chris Cooper to be great, so no surprise there. Pierce Brosnan offers nothing exceptional but operates well within type; Clarkson, as much as I love her, offers a studied but uncomplicated riff on her "housewife experienced in the art of suffering" routine. McAdams, though, is a fascinating actress; her highly limited filmography speaks well of an enigmatic allure, which she funnels elegantly into Kay Nesbitt. Kay is a deceptively deep woman, observant and compassionate but with a clear sense of what she wants for herself. She hesitates, but not because she is expected to, but out of legitimate concern for others. We learn something new about her in every scene we spend with her; McAdams does a commendable job unfurling different layers of this character as the film progresses, never giving us too little or too much. So great. I really wish there was more to this movie, because I feel like it's perched on the brink of greatness but just needed a bit more thought. Another rewrite. Something to energize it more. Maybe a sharper visual eye - there's nothing interesting to look at here other than the opening titles. In its current form, it's doomed to be forgotten, if only to be rediscovered as an actorly curio and subsequently reminding its finders why it was forgotten in the first place.

it's odd the lengths someone will go to, to not hurt someone they love/loved. i really liked it. i couldn't stop watching it, very suspenseful. you can't help but feel like at any moment someone is going to be murdered. it's dark, but very true to life.. everyone's been in a relationship like these depicted in this movie.

While watching this film I was constantly aware that I was indeed, watching a film. In other words I had no emotional investment in what happened - didn't care that there was a betrayal by a best friend, a wife, a husband, etc. Perhaps it was the voiceover that placed the viewer at a distance - but certainly, while the period work was beautiful to behold, it lacked any kind of emotional value whatsoever. Maybe it was because Cooper's portrayal was so introverted and starched that even when he made the mad dash back to his wife it seemed contrived and surreal. I found Pierce Brosnan's portrayal to be very cardboard and emotionless as well - here's a confirmed bachelor who is smitten by his lifelong friend's mistress, and yet everything seems to be so matter of fact, sans any kind of passion that would bring the entire enterprise into relevency. The premiss could have worked wonderfully, but the direction here missed by a mile. It was as if the director was so caught up in paying homage to the period genre he was trying to emulate that he forgot that he was making a film.