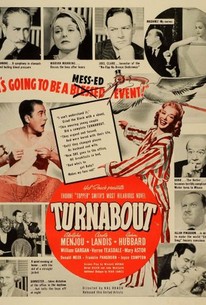 One of several "naughty" screwball comedies based on the works of Thorne Smith (of Topper fame), Hal Roach's Turnabout stars Carole Landis and John Hubbard as unhappily married couple Sally and Tim Willows. Bored with her humdrum existence, Sally spends most of her time figuring out ways of spending her husband's money, while hard-working Tim plots and plans to "step out" on the Missus in the company of his business associates Manning (Adolphe Menjou) and Clare (William Gargan). All of this changes when an effigy representing an Oriental deity comes to life and exchanges Sally and Tim's personalities. As a result, Sally awakens with a deep voice and dons Tim's business suit, while Tim speaks in a falsetto and favors Sally's frilly frocks. The complications ensuing from this role-reversal are much better seen than described, while the film's hilarious denouement was tipped by United Artists' ad campaign, which heralded that "The man's had a baby instead of the lady." Though not nearly as risque as it seemed to be back in 1940, Turnabout is full of wonderful vignettes, including a priceless bit involving veteran screen "pansy" Franklin Pangborn.

This probably seemed daring once, but hasn't worn well.

This self-conscious fantasy of a husband and wife who reverse their biological status is a tired and tiresome jape, as subtle as a five-cent stogie and just as aromatic.

Though there are a few chuckles, the presentation is predictable slapstick and takes much longer than need be to get to the main point.

A daring for its time but now dated screwball comedy.

The original body switching comedy is well played by the stars but nothing extraordinary.