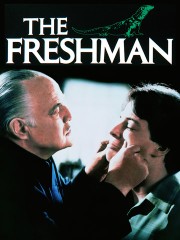 Super Reviewer
Morris N
August 21, 2017
This is probably my vote for Brando's best comedic role, and he spoofs himself playing Don Corleone. It's really something, which is why I rated it so highly. Brando is the only reason to watch this--otherwise it's pretty light fare.

Jackson R
½ November 26, 2016
Chemistry between the two leads is evident, while supporting characters are excellently written. An unexpectedly charming film with quirks that could almost stand alone if not for the well placed spoofs on 'The Godfather'.

PY C
½ November 8, 2016
One of the strangest movies which has an outrageous storyline that doesn't flow. I don't get how this is a good movie.

Christopher B
August 16, 2016
Mildly amusing sendup of the Godfather series, with the one logical choice is top billing in this pic. Great for a date night or a late night flick for the guys to watch while starting on their fourth beer of the night. A must see if only to hear Bert Parks singing that song once again, albeit with modified lyrics. You might also discuss whether you'd dare to refuse a big, wet, sloppy kiss from Brando - remember - it's a sign of respect. Or if you'd sleep with Paul Benedict's character on the casting couch.

william b
August 13, 2015
I like watching Brando, always and forever. This movie was not funny. It was very weak in characters and plot. Cute is all.

Pim C
½ April 12, 2015
I had high hopes for this as I love Brando and comedy, so I honestly thought this would be one of my better purchases, also the 93% rating on this site.

I can honestly say, unbelievable disappointment, the film wasn't funny, the jokes were extremely thin, Brando was there for the paycheck. The script is junk, the jokes bizarre but not actually funny and the story beyond ridiculous.

The main character Matthew Broderick the naive young man who is taken in the by the mob to courier protected Komodo dragon for mob boss Brando is so dumb and naive to the point that you can't take it seriously. "Jokes" or odd situations are unbelievable and stupid that it couldn't be funny.

For example the Komodo runs away and into a shopping mall, a small komodo and apparently that scares everyone in the building into a panic, and they have trouble getting it back as the dragon somehow gets itself onto elevators and so on...please.

For absolutely no reason at all Brando finds Broderick endearing and brings him into the famliy without barely knowing him...makes no sense at all.

The sidekick who recruits Broderick to be courier is also so dumb it's beyond belief, almost mental retardation level stupidity.

This might get a 93% if you're about 6 years old and have drank a bottle of coke, but for anyone with a functioning adult brain you would want a goddamn refund.

bill s
March 25, 2015
A bit jumbled and overblown but the godfather parody works.

Super Reviewer
Ian W
March 22, 2015
A classic movie I have only just got around to seeing. They don't make films like this anymore. Great performance from Marlon Brando playing off his Godfather role and some good humour and well developed plot make this an enjoyable watch.

Adam D
November 20, 2014
Marlon Brando reprises the role of Don Corleone from The Godfather....well, kinda. This film is a little older than me, but I thoroughly enjoyed the charm and chemistry between Brando and Broderick here. Basically, Broderick is a college student who falls into a job working for Brando where he helps import endangered species for cooking and consumption. This young lad doesn't know that they are going to be eaten and that he has fallen into an illegal scheme. I thought this movie was funny and it was a thrill to see Brando sort of playing that character we know and love from THE GODFATHER (with subtle Godfather jokes sprinkled into the dialogue here). Highly recommend you give it a watch.

Philip C
August 22, 2014
The Brando scenes made me smile or laugh. The rest of the movie can be fast-forwarded through

Delphinus C
½ May 15, 2014
Marlon Brando was definitely the most interesting element of the movie, even if I found it hard to understand some of his lines. Broderick was somewhat stiff, which perhaps was viable for the character in those situations, but still wasn't so interesting to watch.

I actually thought the story was kind of lame for the most part. But as things came up to the end it actually picked up a bit, and had a decent ending.

It had a few medium funnies, but not as many as I expected.

Stuart K
½ April 29, 2014
Written and directed by Andrew Bergman, (Honeymoon in Vegas (1992) It Could Happen to You (1994) Striptease (1996) Isn't She Great (2000)), this mob comedy has it's lead sending up his own performance in The Godfather (1972), and he's a good sport for being game to do this film., while it is a tad cliched, it does have some good jokes on display and some good performances too, and it's worth a look. Clark Kellogg (Matthew Broderick) moves from Vermont to study at New York University, but he soon has his money and clothes stolen by Victor Ray (Bruno Kirby), but Clark later confronts Victor, who feels bad, and agrees to give Clark his money and clothes back, so long as he does a favour for his uncle Carmine Sabatini (Marlon Brando). Carmine wants Clark to pick up a Komodo dragon from JFK Airport, and deliver it to Larry London (Maximilian Schell) and his assistant, Edward (BD Wong). Clark does so with his university roommate roommate Steve Bushak (Frank Whaley). But they soon find themselves being investigated by the Department of Justice. It's a very silly film, but it does have some good laughs, and it has shades of what was to come nearly a decade later with Mickey Blue Eyes (1999), another fish out of water comedy with mob sensibilities. Even though Brando predicted the film would be the biggest flop ever at the time, he gives one of his best performances in it.
Page 1 of 16