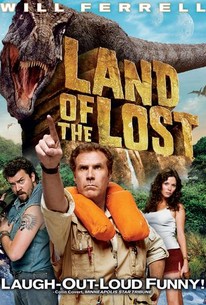 Critics Consensus: Only loosely based on the original TV series, Land of the Lost is decidedly less kid-friendly and feels more like a series of inconsistent sketches than a cohesive adventure comedy.

Critics Consensus: Only loosely based on the original TV series, Land of the Lost is decidedly less kid-friendly and feels more like a series of inconsistent sketches than a cohesive adventure comedy.

Critic Consensus: Only loosely based on the original TV series, Land of the Lost is decidedly less kid-friendly and feels more like a series of inconsistent sketches than a cohesive adventure comedy.

Land of the Lost Videos

Land of the Lost Photos

Space-time vortexes suck. Dr. Rick Marshall is sucked into one and spat back through time. Way back. Now, Marshall has no weapons, few skills and questionable smarts to survive in an alternate universe full of marauding dinosaurs and fantastic creatures from beyond our world--a place of spectacular sights and super-scaled comedy known as the "Land of the Lost." Sucked alongside him for the adventure are crack-smart research assistant Holly and a redneck survivalist named Will. Chased by T. rex and stalked by painfully slow reptiles known as Sleestaks, Marshall, Will and Holly must rely on their only ally--a primate called Chaka--to navigate out of the hybrid dimension. Escape from this routine expedition gone awry and they're heroes. Get stuck, and they'll be permanent refugees in the "Land of the Lost."

Will Ferrell
as Dr. Rick Marshall

Danny McBride (IV)
as Will Stanton

Matt Lauer
as Himself

Leonard Nimoy
as The Zarn

News & Interviews for Land of the Lost

10 Beloved TV Shows That Were Made Into Awful Movies
Will Ferrell’s 10 Best Movies
RT on DVD: Land of the Lost and Hannah Montana

View All Land of the Lost News

Critic Reviews for Land of the Lost

[A] gigantic chunk of scat.

There are genuine thrills, gross-out moments, zingy lines and a Will Ferrell in solid form. No one asked for this movie, but now that it's here, we should be pleased.

By and large, it's knockabout kids' stuff (and has been advertised on that basis), but it has some quite risqué smut.

Humdrum adaptation that should, given the ripe nature of its source material, have been much better.

A ragbag of lackadaisical plotting, drugs references, puerile lechery and shiny effects work, an assemblage far from child-friendly yet not quite grungey enough to wow older teens.

A doughily inexpressive Will Ferrell extinguishes any flicker of originality in one of the worst performances of his career.

It doesn't help that everyone easily outruns the T-Rex, language barriers are introduced but practically ignored, and every dilemma or antagonist presents zero real threat.

Falls short of its comic potential.

More jokes fall flat than actually work, but the complete strangeness of it all adds a level of charm to it that it might not otherwise have had.

Part of the fun in this flick is watching Ferrell turn science fiction stereotypes of the intrepid explorer upside down.

Danny McBride and Will Ferrell make it worth a trip to Land of the Lost.

Who is this movie being made for in the first place?

Audience Reviews for Land of the Lost

Apart from the chosen actors, the movie handled its money SO badly. The effects were adequate and instead of being a family film it's instead decidedly mean. A bad choice. Still I enjoyed the acting from Ferrell and Bride and it was exceptionally funny. And this made up for its flaws. Good for one viewing, just watch it with low expectations.

Matt Lauer and this movie can suck it. Dont get me wrong, I love Will Ferell as much as the next guy, but come on this movie sucked! It had very few funny jokes, bad productions, the plot was hopelessly stupid, and it is the worst thing that happened to Will Ferell since Roxbury. Sorry but I hated this movie.

Land of the Lost, is weird, stupid and really has no explanation of how or why Will Ferrel's character is smart enough to create a time warps millions of years into the past. The visual effects look like they are back in the beginning stages of production, and the visuals are as cheesy as hell. There are sparks of comedy here and there and the story is so laughable that you can't say it's bad. I liked parts and I didn't like parts. This movie is very strange and starts way too fast. The cast holds this film together, as the movie stumbles on poor dialogue, laughable effects and emotion/comedy. This movie has everything and nothing if you know what I mean. This film is in serious need of restructure. It's not bad, but it's just not good. Land of the Lost is just plain weird!

Land of the Lost Quotes