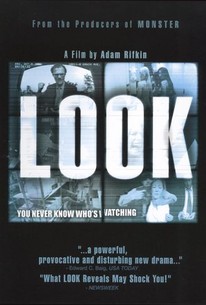 Critics Consensus: Though Adam Rifkin's voyeuristic film sometimes feels like only a clever gimmick, it's for the most part a compelling thriller with political overtones.

Critics Consensus: Though Adam Rifkin's voyeuristic film sometimes feels like only a clever gimmick, it's for the most part a compelling thriller with political overtones.

Critic Consensus: Though Adam Rifkin's voyeuristic film sometimes feels like only a clever gimmick, it's for the most part a compelling thriller with political overtones.

The Post-9/11 world has forever changed our notion of privacy. There are now approximately 30 million surveillance cameras generating more than four billion hours of footage every week in the United States. And, the numbers are only growing. The average American is captured over 200 times a day--in department stores, gas stations, changing rooms, and even public bathrooms. No one is spared from the relentless, unblinking eye of cameras hidden in every nook and cranny of day-to-day life. Shot entirely from the point of view of the security cameras. Adam Rifkin's "Look" follows several interweaving, storylines over the course of a random week in a random city. A high school English teacher tries his best to be a decent husband; a department store floor manager uses the warehouse for more than just storage; a Mini-Mart clerk has big dreams; a lawyer struggles with a sexual dilemma; and two sociopaths thrive on ruining the lives of random strangers. "Look" tells five private stories which unfold before the prying eye of the covert camera to chilling effect. We all choose to hide aspects our lives from those around us, whether it is as benign as picking our noses in an empty elevator or something much darker. "Look" poses the pivotal question: Are we always alone when we think we are?

John Landis
as Himself
View All

Critical Consensus: I Am Legend All Over the Map, Chipmunks Hits Sour Note

The performances feel natural, improvised, and it's easy to believe this is the world we inhabit.

If the idea is that we're always being watched, why does it seem that in this movie, no one's really paying attention?

There are some funny moments, plus occasional nudity and sex, but the joke quickly wears off. What might have worked as a half-hour TV show doesn't suit itself to a feature-length film.

Orwell would have loved it.

With its emphasis on its interweaving stories, the movie offers no commentary on the phenomenon of increasingly pried-apart privacy, positive or negative.

Look, an unsettling, rudely funny but not entirely credible feature by the writer and director Adam Rifkin, is an ensemble narrative for the age of public surveillance.

Rifkin has a cynical view of human behavior and he plays it for cheap titillation and bleak humor, which is mean-spirited at best and glib at worst.

By the end, you're ready to call for the abolition of video surveillance, if only so that you can stop watching all these irritating characters.

Not much is what you get with this bargain-basement attempt at Altman. It has 'direct to video' written all over it

If Crash had been this interesting it might have deserved that Oscar; this movie lacks polish but that is precisely what makes it work. It's a very interesting experiment, one which I found entertaining, nervewracking, and rewarding.

The effectiveness of it in capturing our attention attests to very fine writing and editing which serve the mockumentary framework with immediate gripping power.

This could have amounted to nothing more than a clever trick, but it's much more than that.

The stated intention of "Look" is to show how much time we spend being captured on cameras, by staging the action as if it was being filmed by security cameras. So far, so good. But the movie cheats by including dialogue that would not normally be taped, robbing the movie of any ambiguity that the far superior "Red Road" developed wonderfully. What actually happens with "Look" is that the cameras show how much we lie during the course of a day while the cameras show what the truth is. All the while, we have to ask is anybody watching these images. Probably, since they are occasionally fastforwarded, indicating somebody somewhere is getting bored. The focus of a series of interlocking melodramatic storylines is a shopping mall where Sherri(Spencer Redford) and Holly(Heather Hogan), a pair of vapid teenagers, are trying on clothes in a department store where Tony(Hayes MacArthur), a store manager, is intent on having sex with anything that moves. Sherri will be content with shoplifting and and seducing her English teacher, Mr. Krebbs(Jamie McShane). As bad as some of that sounds, there are worse scenes that are almost impossible to watch while there is one perfect scene in the film that involves a car crash. All of which is emblematic of a low view of human nature with a few exceptions.

Short Cuts with surveillance cameras. Unfairly overlooked writer/director Rifkin creates a fascinating film by following multiple characters stories using only footage of them from various forms of video surveillance (I had no idea so much video surveillance cameras recorded audio, but I'm willing to overlook that nitpick because I enjoyed the film so much). Some stories are horrifying and some simply tragic, but all of them are entertaining and well performed. It's a shame this movie never got a decent release, but much like Rifkin's best films, will eventually become hidden gems. And for Dark Backward fans, check out the advertisement on the bus!

I expected a lot more from this movie then what I got. Lots of T&A, beautiful young women, not real point other then we are on camera where ever we go and when someone wants to use it against us they will. One of those put the kids to bed early movies. Really not a Movie but a Documentary. 1/2 star, pointless.