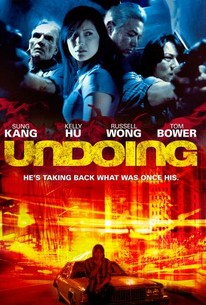 A man learns being an avenger for good is tougher than it looks in this independent thriller from filmmaker Chris Chan Lee. After his best friend, Joon (Leonardo Nam), a small-time dope dealer, is murdered during a shakedown by gangsters, Sam Kim (Sung Kang) leaves the United States and spends a year in Singapore, trying to sort out his emotions. Eventually Sam decides to return to America with two goals in mind -- bring down the thugs who killed his friend, and patch things up with Vera (Kelly Hu), his estranged girlfriend. With the help of underworld kingpin Don Osa (Tom Bower), Sam sets out to get justice for Joon and make up for the pain caused to his friends and associates by his absence. However, Sam doesn't know as much as he imagines about life on the wrong side of the law, and as he deals with career criminals, corrupt police officers, and the drug trade, he is thrust into greater danger than he ever imagined. Undoing was screened in competition at the 2006 Los Angeles Film Festival.

It's arty, murkily plotted and derivative of too many other movies.

Despite the fact that its style comes off as somewhat schizophrenic, Undoing is a film of remarkably direct emotions.

[Director Chris Chan] Lee tries to innovate, but he relies on so many tricks -- woozy overexposures, rapid-fire slideshows -- that his movie looks like the product of a teenager playing with the camera on his new MacBook.

The film is too short because the characters just aren't sufficiently developed, but even at a scant 90 minutes, it feels way too long.

[Director] Lee evokes the character of his varied Los Angeles environments, even if the human element feels as if it's been done -- and undone -- before.

though it's marred by way too many film school editing tricks, it's still a gripping little tale

UNDOING is a perfect example of how NOT to make an independent film.

... full of flashy visual flourishes %u2026 in fact, too full. What at first seems intriguing quickly becomes a problem, complicating an already unclear narrative.

Undoing isn't a bad film; it's just not anything great or worth recommending.

A smidgen of originality lies in its being a noir film with Korean characters: others nothing new, but still a watchable gangster pic.

There are no featured audience reviews yet. Click the link below to see what others say about Undoing!