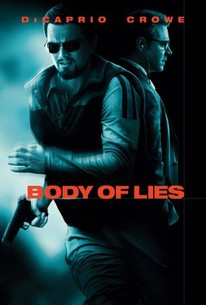 Critics Consensus: Body of Lies relies on the performances of Russell Crowe and Leonardo DiCaprio to elevate it beyond the conventional espionage thriller.

Critics Consensus: Body of Lies relies on the performances of Russell Crowe and Leonardo DiCaprio to elevate it beyond the conventional espionage thriller.

Critic Consensus: Body of Lies relies on the performances of Russell Crowe and Leonardo DiCaprio to elevate it beyond the conventional espionage thriller.

Fresh off of their success with director Martin Scorsese's The Departed, star Leonardo DiCaprio and screenwriter William Monahan team with director Ridley Scott for this screen adaptation of David Ignatius' novel Body of Lies. When CIA operative Roger Ferris (DiCaprio) uncovers evidence indicating that a major terrorist leader may be operating out of Jordan, he enlists the aid of CIA veteran Ed Hoffman (Russell Crowe) in infiltrating the elusive saboteur's vast underground network. During the course of his dangerous mission, Ferris gradually comes to question how much he can trust his presumed allies -- who include not just Hoffman, but the outwardly helpful head of Jordanian intelligence as well. ~ Jason Buchanan, Rovi

Alon Aboutboul
as Al-Saleem
View All

News & Interviews for Body of Lies

View All Body of Lies News

Critic Reviews for Body of Lies

It's James Bond via today's headlines, which should, I suppose, at least make it feel very now, but it doesn't. There is nothing in this you haven't seen before, and oodles that you have.

Quite frankly, it was a waste of two talented actors.

Perhaps Scott's ever-restless shooting style doesn't quite differentiate between the peaks and troughs of the narrative, yet it's still an engrossing account of the intersection between process and ethics.

But despite the immaculate production values, the satire is so unspeakably crude that it ceases to matter. A shame. Scott has been an instrumental director in the Hollywood evolution of war films. But Body of Lies is a one-note rant.

Body of Lies is big and bombastic, confused and irritable - a 20th-century blockbuster struggling to adapt (too little, too late) to a 21st-century terrain.

Scott, at heart, is a pyrotechnician rather than a political philosopher. Sometimes, during the scenes when he shows graphic acts of torture, he seems like a two-penny shock merchant, too.

Avoids making moral judgments or taking sides, preferring to allow the audience to come to their own conclusions.

Nail-biting suspense at every turn.

Scott is great, as usual, at flashy pyrotechnics, but action fans will probably lose patience with all the tangled plotting.

Rises above the mediocrity of its storyline thanks largely to its ensemble cast.

Body of Lies, on the whole, is a retrograde fantasy. Its characters are unconvincing inventions.

Body of Lies is a well-made film, but lacks the emotional impact required to keep its audience interested.

Audience Reviews for Body of Lies

C.I.A. operative Leonardo DiCaprio enlists the help of the Jordanian secret service to locate the leader of a terrorist cell responsible for bombings in Europe. Being a massive fan of Ridley Scott, I always have very high expectations for his films and this was no different. Unfortunately what you get is more James Bond than Syriana, the depth and insight into the political situation in the Middle East sorely lacking, the film underneath being more a straight cold war style espionage thriller. I did like the way it showed the parallel between DiCaprio's handler and the terrorist leader as two sides of the same coin; each arrogant egoists with no understanding of or respect for their adversary or their culture, using their "followers" as disposable pawns in their own little power games. It's certainly very solidly made, with decent performances, quality visuals and an intelligent plot, but as with Vietnam, I think we will have to wait til the conflict has ended before we see any truly worthwhile cinema about the subject, at least from Hollywood.

Leo is a CIA agent with a conscience, on the ground hunting for terrorists in the Middle East. Russell is his boss who works from Washington DC and monitors the situation by remote satellite. Good intense action thriller. Lots of bombs, gunfire and torture. Not for the faint hearted. Great performances by Leo and Russell. Movie similar to 'Spy Game' in terms of working relationships and terrorist themes.

There's nothing wrong with this standard thriller about a CIA operative in the Middle East going after secret terrorist leaders, it just doesn't stand out is all. There's a standard romance, standard machinations, standard twist at the end. Eh.

One of Ridley Scott's most underrated movies.