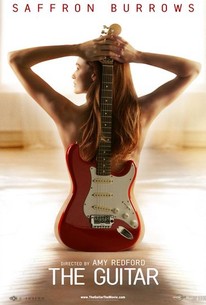 A doomed woman discovers her creative spirit during a final fling with life in this independent drama. Melody Wilder (Saffron Burrows) is already having a bad day when she visits her doctor about a troubling lump in her throat -- her boyfriend has left her, and she's lost her job. However, this news pales in comparison to what her doctor (Janeane Garofalo) has to say: the lump is an inoperable cancer, and Melody has only a short time to live. Throwing caution to the wind, Melody rents a huge, luxurious apartment and furnishes it in high style, putting her purchases on a handful of credit cards she won't be around to pay off. Melody also permits herself affairs with a few of the deliverymen who have become regular visitors to her loft, but she spends most her days alone, enjoying the trappings of wealth as she ponders what little future she has left. One day, Melody makes an impulse purchase, a red electric guitar that looks like one she wanted as a girl. While Melody isn't schooled on the instrument, she begins teaching herself to work out chord patterns and melody lines, and in the last chapter of her life discovers a way to give voice to the pain and confusion she's buried within her. Written by veteran underground filmmaker Amos Poe, The Guitar was the first feature film from director Amy Redford. ~ Mark Deming, Rovi

Critic Reviews for The Guitar

The Guitar is a lark, at best, but when Burrows' healing indulgence extends to taking on lovers of both sexes, its goofiness acquires a certain hedonistic charm.

[A] bizarre art-house equiva lent of The Bucket Lisy.

That the movie is easy on the eyes (Melody's fetching silhouette against those sunset river views) doesn't make it any less bogus.

Some new directors often opt for minimalism in the hope that less is more. This doesn't work for Amy Redford (Robert's daughter), who transitions from actress to filmmaker with The Guitar.

The movie has more clichéd rebirths in mind, and you'll resent where it goes.

Written by Amos Poe and directed with moxie by Amy Redford, it's the ultimate movie about optimism.

A strong, kind-hearted start to a hopefully active career [for director Amy Redford].

An interesting premise is weakened by directorial callowness, tonal uncertainty and an unengaging central performance.

I was seduced by Melody's story. Sucked in, enjoying Amy Redford's film despite myself.

Saffron Burrows is commanding as a distraught woman who finds a novel way to cope with tragedy, but the movie constantly subverts realistic detail with the fantastic in ways that are not dramatically satisfying.

Audience Reviews for The Guitar

Well, here ya go. This would be me in a nut shell if I found out that I only had 30-60 days left to live.....that is, if I didn't have kids and a husband that would have to inherit my debt. This girl totally decided to live out her dream before it was too late. I can't even imagine a better way to go out. Nice little twist there at the end. It probably doesn't hurt that I am a sucker for a decent music inspired film.

"The Guitar" starts with Melody Wilder(Saffron Burrows) being diagnosed with inoperable cancer by her doctor(Janeane Garofalo) and given probably a month to live. To add insult to a terminal diagnosis, she is laid off and dumped by her boyfriend(Reg Rogers) in quick succession. While contemplating a shortcut to oblivion, she instead notices an ad for a short-term luxury apartment to which she sinks her savings and severance check into. "The Guitar" is a modest movie that is buoyed by a very fine performance from Saffron Burrows. Most people with little time left to live might be inclined to travel to a sunny beach somewhere but Melody is a New Yorker and a New Yorker's perfect fantasy is a spacious apartment. And that's not the only fantasy explored here. But after a while, it becomes clear that there are only two directions this movie can go in. In the end, it chooses the wrong path which leads the story to become more preposterous as it goes on as fantasy becomes more the rule than any reality.

What would you do if on the same day you get laid off, your boyfriend decides to dump you and you are told you have cancer and only a month or two to live? This movie presents one response. Makes you think.

I thought that The Guitar was a pretty swell movie. I usually hate movies about people who suddenly find out that they're dying, and then finally start to live their lives when their lives are about to be taken from them. But The Guitar handles this kind of a story in an organic, modernistic manner that doesn't rely on sappiness or melodrama to connect the audience to the protagonist. Saffron Burrows does a marvelous job. Her facial expressions almost tell the story well enough to preclude any dialogue on her part. There are other fine acting jobs here, but they all drift on the periphery of Saffron's excellent performance. It's nice to find a movie from time to time that I like despite my reservations. I'm not the kind of guy who would typically be interested in this genre of movie, but The Guitar was more than enough to get me to overlook that particular bias.