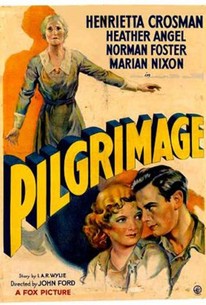 John Ford directed this emotional drama, which was a considerable change of pace from the westerns and war pictures for which he was best known. Hannah Jessop (Henrietta Crosman) fears being abandoned by her son Jim (Norman Foster), and she doesn't approve of his romance with Mary Saunders (Marian Nixon). When Hannah discovers that Jim and Mary plan to wed, she sends her son off to fight in WWI, unaware that Mary is carrying his child. Jim is killed in combat just as Mary is giving birth, and while Hannah is crushed by the loss of her son, she cannot forgive Mary or abide her grandson, Jim, Jr. (Jay Ward). Years later, Hannah is prodded into joining a group of women who lost their sons in the war on a visit to the battlefields of Europe; en route, she meets Mrs. Hatfield (Lucille La Verne), whose warmth and gracious acceptance of her misfortune forces Hannah to take a look at herself and her attitudes.

Maurice Murphy
as Gary Worth

Hedda Hopper
as Mrs. Worth

A powerful fable of political progress.

The company responsible for this ghastly thing makes it only more mephitic by giving it a splendid production.

It's mostly the meticulous filmmaking and those two performances that raise Pilgrimage to the level of art. There's not a misjudged moment and not an indifferently framed shot.

The wholesome film speaks volumes for Ford's talent, but the overwhelming sentimentality drowns it in false poignancy.

some beautiful shots here. the last scenes get a little out of hand but henrietta crossman's performance holds it all together