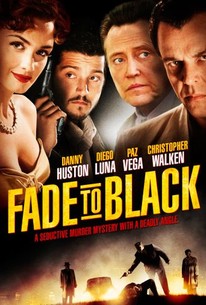 A screen legend is drawn into a murder mystery that reaches to the highest ranks of the entertainment industry in director Oliver Parker's 1940s-era thriller featuring a sleuthing Orson Welles (played by Danny Huston). The year is 1948 and, having just suffered a breakup with Rita Hayworth and a falling-out with Hollywood, Welles arrives in Rome to appear before the cameras in Black Magic. Though Welles' primary concerns on the set of his latest film are to forget his troubles back home and secure financing for his next directorial effort, the on-set murder of a supporting player proves but the opening act of a much larger mystery. Subsequently enlisting the aid of his faithful driver, an ex-policeman named Tommaso (Diego Luna), Welles discovers a hit list that includes his name and points to a deadly and far-reaching conspiracy. As the first democratic elections draw near and old vendettas slowly begin to surface, Welles and his sleuthing companion are about to come into the company of some very dangerous people.

Pino Ammendola
as Grisha
View All

Critic Reviews for Fade to Black

All credit to writer-director Oliver Parker for trying to broaden his CV, but Danny Huston is a terrible bore as Welles, Paz Vega continues to be incomprehensible in English, and the murky mystery plot limps along unrewardingly.

On paper this must have looked a neat idea: a wildly fictionalised account of a skid-row Orson Welles, up to his neck in political skulduggery while shooting a third-rate picture in post-war Italy.

Like Black Magic itself, alas, this is destined to be a forgotten curio of limited appeal.

For all its flaws, it's a movie-lover's movie, and clear evidence that Parker should push himself a bit more often.

A terrific idea is unfortunately wasted. The great cast is wasted too.

A retro pastiche that, like The Good German before it, will be of limited interest to all but the most ardent film buff.

Fade to Black is as sleek and attractive as the chrome polished vintage cars Huston travels in, but never truly gets in gear.

Audience Reviews for Fade to Black