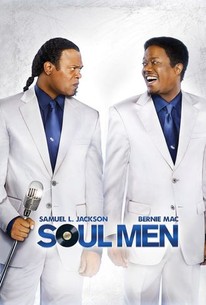 In 1965, Marcus Hooks (John Legend), Floyd Henderson (Bernie Mac), and Louis Hinds (Samuel L. Jackson) were just three kids singing doo-wop harmonies around a fire barrel when legendary record producer Willie Mitchell caught an earful of their infectious harmonizing. Two short years later, Marcus Hooks and the Real Deal had signed to Hi Records, and they quickly became one of the most popular soul acts in America. But success can't last forever, and it wasn't long before Hooks decided to strike out on his own. Though Floyd and Lewis did their best to keep the Real Deal going, scoring one breakout hit with "Walk in the Park," clashing egos and "creative differences" would eventually break the duo apart. Flash-forward to the new millennium, when Hooks has won a staggering total of 19 Grammy awards while Floyd and Lewis languish in obscurity. Then, one day, while considering suicide with a mouthful of pills and a bottle of liquor, Floyd is shocked to see a news report that Hooks has suddenly dropped dead just before he was slated to be inducted into the Rock and Roll Hall of Fame. In order to celebrate Hooks' career, Hi Records has organized a lavish tribute concert at the Apollo Theater. Will Floyd and Lewis be able to put aside their differences long enough to drive cross-country and perform together on-stage one last time, or will lingering grudges ultimately cause the pair's already-tenuous relationship to implode long before they reach New York City?

Isaac Hayes
as Himself

Soul Men could have been so much more.

Considering the canvas the story provides, and the richness of the tradition it taps into, the amount and quality of the music is pretty disappointing.

This one's only fair, but it has its low-down wiles and its moments.

It is not a perfect film but it is a nice, solid reminder of how great Bernie Mac was.

It really is bittersweet to watch Mac in one of his final performances. He makes the most of pretty average material here.

The movie crams in myriad needless subplots -- ostensibly to provide padding, which only draws attention to how thin the original story really is.

Not a hint of originality can be found in this lifeless tribute to music and old school mayhem.

In the end, its lack of originality and extremely low sense of humor keep Soul Men down a lot further than it deserves. There's potential there, but it's never realized.

Soul Men may get by on novelty, but what novelty!

Be prepared to laugh out loud and move to the music as Soul Men has plenty of both to offer.

Are there two other actors who are able to utter the word 'motherf**ker' with such forceful comic authority? I think not.

Funny, funny, funny. I nice tribute to serve as Bernie Macs last film. Highly enjoyable. My husband and I really got a kick out of this movie. It had some really fun songs, too.

both a buddy film and a road film, this comedy has its moments, but all too often it seems to forget how to be witty, so relies on funny looks and MF's by Bernie Mac way too often. So much of this film seems pasted together and you feel that, in spite of this being Bernie's last film, this was pretty much paint by the numbers, and just about everyone's hearts weren't in it. Sloppy is a good way to describe the direction - flashbacks of "previous" scenes, that were actually on the cutting room floor parred with a "just keep the camera rolling and something magical will happen" feel, keep this film tethered to the ground, where it could have soared. There are some nifty period soul tunes by Stanley Clark, and a nice premise, but oddly for "soul men" no soul. I truly question how a film about a soul singing act, and with such talented musicians involved (the aforementioned Clark as well as Issak Hayes), can be lazy enough to suggest that in 3 different towns a back up band shows up from out of nowhere, instantly knowing all the dudes' material and performing flawlessly. Uh, don't think so Sparky. Using the rehearsing of various backup bands could have been mined for humor as well as giving the film a more authentic feel. This film reminded me of The Blues Brothers, in the road trip aspect, and many a Lemon/Matheau comedy (Grumpy Old Men, Out To Sea, etc), only not done as well. What a waste of two very talented actors.

Good plot/storyline, good duo, music, and a cameo from the late Isaac Hayes. Bad, bad script, empty. Expletives can only carry movie so far. Its weird how this was the last thing both Mac and Hayes worked with, soul is dangerous.

Having seen this movie,I rated it higher on the laughter scale. Not since the great Richard Pryor or to an lesser extent the late great Rudy Ray Moore has their been a comedian like Bernie Mac that can take a vulgarity into a great conversation. Soul Men works on both levels,because for one,it has the ability to take any random series of insults and off the chain vulgar words and quickly shape them into a beautiful sculpture of apoplectic hatred,a rare skill that is fading fast from the film industry. It is riveting funny as hell to just watch people like this argue. The other is this....this movie shines simply because Samuel L. Jackson and Bernie Mac are two of the best cussers in Hollywood and not since the days of Richard Pryor has there ever been anything like it since. However,the performances between Samuel L. Jackson and the late Bernie Mac are brilliant in every detail. Since this will be the only movie where you'll get to see two of the greatest actors/comedians of their time. Also to mention here is the appearance of another great who is a legend himself in R&B..the late Issac Hayes who passed away in August of this year(along with one of the greatest comedians ever Bernie Mac). R&B soul king John Legend has a role here as well along with Pamela Anderson in a cameo appearance.