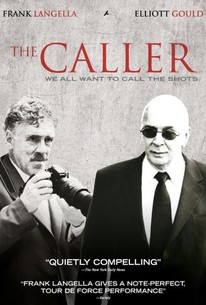 When a whistle-blowing executive at an international energy firm prepares to expose his company's corrupt practices in Latin America, he secretly hires a private detective to track his every move for fear that he will be killed for his bold transgression. Jimmy Stevens (Frank Langella) has had enough of the lies and deception, and now he's going to something about it. He also knows that chances are good he'll pay the ultimate price for doing what he's about to do, so as a form of insurance Jimmy hires private detective Frank Turlotte (Elliott Gould) to keep a close tab on him. But Frank doesn't realize that the man who hired him and the man he was told to trail are one in the same, and as the paths of the two men begin to intertwine, the secrets of the past offer clues to the mysteries of the future. Mulholland Drive star Laura Harring co-stars in a twisting neo-noir thriller from A Hole in One director Richard Ledes.

Charles Nordeen
as Waiter
View All

News & Interviews for The Caller

View All The Caller News

Critic Reviews for The Caller

IF Frank Langella hadn't received an Oscar nomination for "Frost/Nixon," it's pretty doubtful that an opaque oddity like Richard Ledes' The Caller would have managed even a one-week vanity booking at the Quad.

There's a vaguely appealing elegance to the way the film moves -- that is, when the actors stop spouting laughably portentous dialogue long enough for one to appreciate the film's pacing.

The Caller is a loopy, talky, 92-minute two-hander with Elliott Gould and Frank Langella (on a downward spiral following his juicy triumph in Frost/Nixon), written and directed by a force to forget called Richard Ledes.

We're left to wonder why we're watching Gould scramble for clues to a mystery we've been given the solution to.

Sadly, The Caller, the second feature from director Richard Ledes, doesn't allow its leading men the luxury of their legacies, instead forcing a wan quasi-thriller in the space where a laidback character study should be.

Here's a quiet lion..read on->

Director Richard Leder was lucky enough to land actors of the caliber of Oscar-nominees Elliot Gould and Frank Langella only to squander their collective talents in service of a tedious yawner.

Frank Langella and Elliot Gould lend gravitas to this enigmatic cat-and-mouse game which unfolds far too slowly with not enough of a dramatic payoff.

Very few actors have the ability to make a silk purse out of a sow's ear and almost have you completely forget you're interacting with pork product. Frank Langella is one of these.

Audience Reviews for The Caller

In "The Caller," Jimmy Stevens(Frank Langella), who after many years of being corrupt, has a crisis of conscience that causes him to not only blow the whistle on his employers in the energy industry, but also publicly expose them as the murdering scumbags they really are. This action does not come without a price as they would like him to take a trip to Red Hook. In return, he asks for two weeks in which he hires Frank Turlotte(Elliott Gould), a private investigator and birdwatcher, to trail him. "The Caller" almost succeeds solely on the merits of Frank Langella's quietly commanding performance. Overall, the movie is too modest to successfully connect its thoughts on World War II, 9/11, heightened security and oil companies into a coherent statement. Otherwise, there is not much else of interest, as it tips its hand too early when it should have instead patiently allowed the details of Jimmy's life to slowly unfold through Frank's eyes. As it is, Frank's observations verge on the unbelievably unprofessional, critiquing Jimmy as the epitome of boring.(Not to judge the watcher, but this comes from a solitary man who prefers the company of birds to humans.) There is a little bit in Frank that is endearing in finding simple pleasures in unexpected places in New York City but the film narrowly defines the city as Manhattan. It is Brooklyn where Jimmy is forced to go to.

Pretty cool movie a Private Investigator is hired by a man who wants the PI to follow someone, who the man who hired him. Twist and turns throughout. I enjoyed the suspense and Drama I'd give it 4 stars