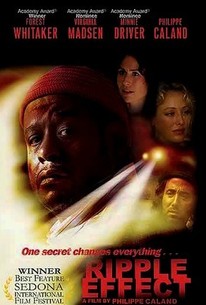 Philippe Caland directs and stars in this karmic drama about a hip, new age clothing designer from Lebanon who attempts to engineer redemption after realizing that a mistake from his past may have destroyed his entire future. Amer Atrash (Caland) is a first generation immigrant who's perpetually on the verge of the American Dream. But despite his repeated attempts to achieve financial success, it seems that complications always arise at the eleventh hour that set him directly back to square one. Now, after years of struggling, Amer is set to debut a cutting edge clothing line that could put him on top of the world. When the rug is pulled out from under Amer's feet once again, his efforts to hustle his way through the predicament ultimately amount to naught. Later, when Amer's wife Sherry (Virginia Madsen) admits that she's been feeling neglected and needs time to decide whether it's worth working to save their marriage, the dejected designer tells her a secret that he's never revealed to another living soul. Fifteen years earlier, Amer was involved in an accident that left a man named Phillip Blackman (Forest Whitaker) wheelchair bound. Could it be that all of Amer's current life problems somehow stem back to that one fateful night? Upon hearing Amer's story, Sherry encourages her husband to seek out Phillip and make amends. Later, after locating Phillip's beautiful wife Kitty (Minnie Driver), Amer begs for forgiveness by citing all the bad things that have happened to him since the accident. When Phillip and Amer set out on a journey designed to alter Amer's current state of mind and finally bring him nearer to enlightenment, the lives of both men are profoundly changed in ways that neither could have ever anticipated.

Michel Nahas
as Businessman
View All

Starts with a not-very-original insight and takes too many shortcuts delivering it.

Several ordinarily banal movies soldered into one amazingly bad one.

After a bumpy start, Ripple Effect begins to show why Whitaker, Virginia Madsen and Minnie Driver signed on as executive producers and co-stars.

Thank God Whitaker is here to bring a bit of real pathos and ambiguity to his role as the spiritual guide who's gained wisdom through adversity, because without his Oscar-winning chops, this exercise in pop mysticism would have been too painful to bear.

Kudos to writer/director/co-star Philippe Caland for crafting such a refreshingly unpredictable cautionary tale and for coaxing inspired performances from an A-list cast which inludes by Forest Whitaker, Virginia Madsen and Minnie Driver.

I understand Amer is supposed to be going through some sort of spiritual crisis here, but Caland plays him as so self-centered and precious that it's impossible to feel any sympathy for him.

Nothing more than an elongated soap opera, sans the self-awareness.

There are no featured audience reviews yet. Click the link below to see what others say about Ripple Effect!