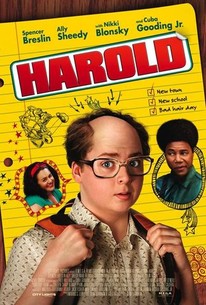 As a young teenager suffering from really early male-pattern baldness, Harold has never had it easy. Despite the efforts of his scattered mother --- and aggravated by his beauty-queen-mean sister - life is a trial for Harold. And, now his teen angst is topping out: He's facing his first day at a new high school in a new town. He's not only going to be the "new kid," but the "new weird bald kid." Day one turns out to be even worse than he expected. Right off he comes face- to-face with the school bully, and learns very quickly that the new school's teachers are barely more sympathetic or supportive than his bullying nemesis. Harold's saving grace arrives in the person of Cromer, the subversive school janitor, who knows and cares far more about the students than any teacher or administrator. With a cleverness hidden behind his unassuming janitor's uniform, broom and bucket, Cromer comes to Harold's aid, teaching him how to out maneuver his adversaries, and, ultimately, how to survive that most difficult and dreaded American institution ---High School.

Nicky Katt
as Police Officer No.1

Joey Blonsky
as Malcolm
View All

A terminally lame puberty comedy about a prematurely bald 13-year-old.

Harold is a genuine oddity that's more watchable than it sounds.

There's little indication, beyond the endlessly unfunny school humiliations and fogey-dom signposts (ha ha, he uses Old Spice), that the notion of a preteen codger is worth our sympathies.

Harold is the type of one-note dead zone ideally suited for a bathroom break while sitting home on a Saturday night, alone and semidrunk, in front of the television.

The long stretches of dead air that, it can only be assumed, were supposed to be filled by laughter provide ample time for pondering what audience Harold, T. Sean Shannon's strenuously stale comedy, was intended to find.

confidently struts along, seemingly unaware of its lackluster script and distinct lack of professionalism.

While the script never gels into anything worthy of the peculiar premise, Harold is still worth seeing for Breslin's marvelously weird performance.

Has a wan sweetness to it which helps it through its more forced and obvious patches, of which there are many.

Shot and lit like a mediocre TV show, the sporadically amusing Harold is a true Blockbuster contender, that is for the bargain bins of the video store. And soon.

Breslin is the best thing about this myopic comedy that doesn't even get any humorous traction from the stereotypes it presses through its low-fidelity independent film filter.

An outsider adolescent sinks in a sea of troubles in this wobbly comedy.

The presence of Cuba Gooding Jr. in this odd little indie comedy should set off early alarm bells.

There are no featured audience reviews yet. Click the link below to see what others say about Harold!