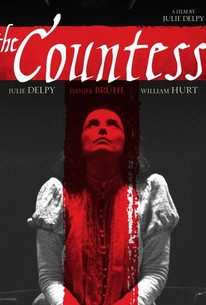 Julie Delpy directs and stars in this biography of Erzebet Bathory, the 17th century countess whose love of a younger man drove her to madness and beyond. At the dawn of the 17th century, Countess Bathory was the most powerful woman in Hungary. At the age of 14, she married a powerful warlord twice her age and bore him four children. While her husband was away fighting wars, Countess Bathory maintained their estate with the help of her one true confidant, a powerful witch named Anna Darvulia. Over time, Countess Bathory's gained great influence, even holding sway over decisions made by the King. But she was unwilling to accept a world in which men were able to break the rules without consequence while women were expected to be unquestionably subservient, and after her husband died, Countess Bathory fell deeply in love with a young nobleman named Istvan (Daniel BrÃ 1/4hl), whom she encountered at a lavish feast. Istvan too was smitten, though his relationship with the countess was cut short when his father, Count Thurzo (William Hurt), forced him to break off the romance. Meanwhile, as Countess Bathory becomes obsessed with the prospect that age was a factor in the failure of the relationship, Count Thurzo begins crafting an elaborate plot against her. Eventually Countess Bathory's blinding sadness gives way to irreversible madness, and she becomes convinced that she can maintain her youth and beauty forever by bathing in the blood of virgins. Her dementia and obsession flowing like the virginal blood she bathes in every night, Countess Bathory eventually realizes that she has become the victim of a vast political conspiracy hatched by the father of her beloved. But by now it's already too late, Countess Erzebet Bathory's downfall had already been set into motion. ~ Jason Buchanan, Rovi

Critic Reviews for The Countess

Wacky tale of a woman who killed virgins for their blood to keep her skin wrinkle-free might get some traction in Central Europe, where it is set, but won't make it past the Europudding label elsewhere.

A bizarre tale of a vampiric countess performed with stilted, faux-Shakespearean dialogue

Audience Reviews for The Countess

Despite its first-rate costume design and Erzsébet Báthory being such a fascinating subject, this flawed historical drama seems more like a soap opera that tries too hard to soften her image as someone broken-hearted by love but ends too ambiguous for us to care.

True story? Who knows. Story derived from legend? Absolutely. Famous for her obsession with virgin blood, the story of Countess Elizabeth Bathory is a fascinating one, at any rate. Julie Delpy's performance here was outstanding, and her portrayal of mental illness, and heartache, was well done. Good scenery. Good supporting cast. I enjoyed this...

It's pretty one-note but bonechilling and believable enough to work. This isn't really the epic period love film I always dreamed it would be, but it's quite Black Swan.