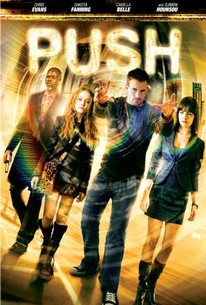 Critics Consensus: The sci-fi thriller Push is visually flashy but hyperkinetic and convoluted.

Critics Consensus: The sci-fi thriller Push is visually flashy but hyperkinetic and convoluted.

Critic Consensus: The sci-fi thriller Push is visually flashy but hyperkinetic and convoluted.

Lucky Number Slevin director Paul McGuigan takes the helm for this action thriller concerning a group of telekinetic American ex-patriots who band together in an attempt to take down the clandestine government agency that's genetically transforming normal citizens into powerful psychic warriors. The Division is a shadowy government operation devoted to making humankind the ultimate weapon. Those who accept this transformation have the power to move objects with the mind, see the future before it happens, create new realities, and dispense of their enemies without so much as a single touch; those who are unwilling to participate are immediately terminated. Nick Gant (Chris Evans) is a "mover," a second-generation telekinetic who went into hiding after the Division killed his father more than a decade earlier. He lives a life of anonymity in Hong Kong, a densely populated place where fugitive psychics such as himself are safe as long as they can keep their unique gift secret. Suddenly into Nick's life comes 13-year-old "watcher" Cassie Holmes (Dakota Fanning), a clairvoyant who needs his help in tracking down escaped "pusher" Kira, who may hold the key to bringing down the Division once and for all. A "pusher" is the most powerful kind of psychic due to his or her ability to influence the actions of others by planting thoughts in their minds. Now, as Nick emerges from hiding in order to help Cassie find Kira, the Division's human bloodhounds are hot on their trail. In order to elude the authorities, they'll need to disappear into the seedy underbelly of the city while relying on a team of rogue psychics to help cover their tracks. But Division Agent Henry Carver (Djimon Hounsou) is a powerful pusher who has made it his mission to stop them at all costs, regardless of the collateral damages that may occur in the process. ~ Jason Buchanan, Rovi

jThe script has no deep meaning and the film does just what it was intended to do: take an audience on a fantastical journey with loads of action.

Push is a chase film dolled up with supernatural powers and chintzy retro design motifs.

McGuigan's saving grace is a willingness to slow down and savour his own images. At best, a moody inconsequence takes over and confusion feels like part of the plan.

Kinetic and convincing, this uses a limited budget to thrilling effect, giving us a sort of X-Men-meets-Trainspotting twist. We hope a sequel follows this early promise.

In time this would-be thriller comes to rest with a fist fight, a hanging ending and the implicit promise of a sequel. Of all the calamities that Fanning predicts, Push 2 is one she missed.

Showcases a remarkable amount of creativity and potential, yet oddly shifts between a state of incompletion and overdevelopment.

Push is an empty calorie extravaganza and demands a crooked concentration it doesn't earn to sufficiently piece this mess together.

Set and filmed on location in bustling Hong Kong, the tight urban street and winding alleyways suit the film perfectly, but this is not enough to save Push from the Oscar season garbage dump.

Light fixtures are the true stars in "Push," constantly reflecting, twinkling and popping. Its best moments are when guns levitate and fire themselves. When you don't even need actors to hold pistols, it's the ultimate in autopilot filmmaking.

The premise is promising all right, but it's a movie over-stuffed with talk and actors with a glazed look as though they too aren't sure of what they're doing.

Nothing special, the directing style kinda make the story a little confusing to be consumed..

Young people with magic powers avoid gloomy (dastardly?) secret government types in Hong Kong. Not bad, and the big Asian town provides a needed break from the usual, but plot contortions aplenty and that maddening, supposed-to-be-cool-MTV-video-sh-sh-shaky-camera work undercuts the work for the worst. And how is it that nobody with magic powers in all these "I wish I had magic powers wish fulfillment movies" enjoys the use of it???

You know I really didnt hate this movie or really like it. I think my daughter liked it more when she came in and out of the room watching bits and pieces. Overall I was not disappointed since i did not go in with much.