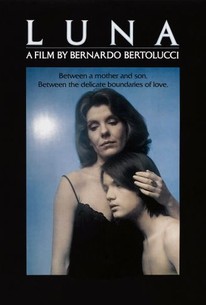 The tumultuous life of a troubled teen is examined in this controversial film from Bernardo Bertolucci. Joe, the boy in question, has been spoiled and is in dire need of a strong father figure. His stepfather Douglas, who believes that he sired the boy with his wife Caterina, an opera singer, is simply unable to deal with him. Joe continues to get in trouble. After he watches his despondent "father" commit suicide, the boy and his mother move to Italy where she tries to make a comeback. The boy soon finds himself involved with a bad crowd and becomes a heroin addict. His poor frazzled mother almost has a breakdown when she and her son almost become lovers. Before the end of the film, Joe finally gets to meet his real father, Giuseppi, who has been hiding in Italy and teaching children. It is he who saves the boy from descending further into a life of darkness and degradation.

Franco Citti
as Man in Bar

Carlo Verdone
as Director of Caracalla

Luna seduces and repels you at the same time. It's a film about the silences and cruelties between people, but it explodes with color, music, and movement.

Channelling a Viscontian elegance, Bernardo Bertolucci probes the allure of bourgeois excess to its core of perverse desire-and ultimately suggests that it's made of frustrated dreams of normalcy.

In elegance, rapidity of execution and perfection of expression, Bertolucci is the cinema's Stendhal.

Loud, vulgar, and frequently obnoxious, the film nevertheless has a perfect integrity in its excesses. This is filmmaking from the groin, unabashed and unrestrained.

Did a little bird try to warn Bertolucci that this material was, to put it kindly, two bricks short of a load?

La Luna is a spectacle-sized melodrama filled with a variety of themes -- plots and subplots that merge asymmetrically into a melodramatic mold.

The script is poor and the story will only convince Bernardo Bertolucci's devout fans. [Full Review in Spanish]

"Luna" is an indefensible film because it is built on unsupported narrative clichés that Bertolucci never resolves.

Bernardo Bertolucci's excessive look into the life of a troubled teenager created quite a stir upon its original release.

La luna may not be the masterpiece all involved had intended it to be, but it is unlikely you will have the opportunity to experience a film so brazenly rich and ambitious from today's filmmakers.

Ultimately, while Luna hints at a resolution for its characters that restores the normative balance of the family structure, it also seems to content to keep its vivid beauty and its dark, perverse passions hopelessly entangled.

Ravishing to look at, but the movie's real curiosity is the way it fails to reverse Bertolucci's usual preoccupations.

Very long at over 2 hours, but is so beautifully done it does not out stay it's welcome. This film deals with very damaged people and it won't be for everyone as it does contain quite an unhealthy relationship between a mother and son. It is not done in an exploitative way, though, these are people who are in pain and maybe even temporarily crazy. I was very impressed with the young guy who plays the son. I was surprised after watching this that his career never went further. He plays vulnerability and distress beautifully. Jill Clayburgh as the mother is slightly over the top, but then so is her character, so I assume she was written that way. Well worth a look.