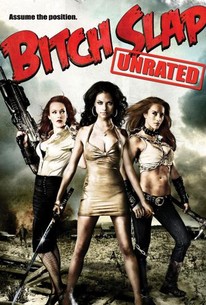 A sex-bomb, a psycho-slut, and a stripper find their attempt to extort a powerful underworld kingpin spiraling out of control in this outrageous homage to the exploitation films of yesteryear. They thought it was a foolproof plan, but these three bad girls are about to see just how bad things can get when the truth comes out, allegiances start to shift, and other desperate criminals attempt to muscle in on the take. Later, the stakes are raised when it's revealed that the entire plan was a setup. With the fate of the world resting in their not-so-delicate hands, these three violent beauties are about to discover that everything they thought they knew about the job is wrong, and that their may be an extraterrestrial invader lurking in their midst. ~ Jason Buchanan, Rovi

Jim Klock
as Officer Spanky With a 'Tude

Paul Karami
as The Sheik le Freak (aka Jihad Jackson)

If the film's half-baked salaciousness feels merely risible, its slapdash screenplay and cheapo look make it something that its generic forbearers rarely were: boring.

The latest proof that calculated camp in the form of homage is nearly impossible to pull off.

The target audience must be that awfully precise niche that never tires of women punching each other.

For all of its potentially 3D-appropriate use of flying objects and big boobies, "Bitch Slap" doesn't hold a candle to Russ Meyer's truly transgressive "Faster, Pussycat! Kill! Kill!" - an obvious inspiration for this gutty little action film.

Jacobson and Gruendemann appear determined to put the grind into grindhouse. And not in a good way. Everything goes on so long, including an excessively protracted catfight, that the viewer will be crying for mercy before the characters do.

By far the best elements are the regular flashbacks, which showcase the crazy comic book vibe at its best and have some truly spectacular Charlie's Angels-style moments.

More suitable for background noise on a late night than an actual big event you can gather with your friends to watch...

Like an issue of Maxim that flips its own pages, but keeps stopping to read the articles.

Do you like gratuitous violence, tits 'n' ass? course you do, who doesn't. Well what better way to show off some blatant soft porn than in a low-rent, Tarantino/Robert Rodriquez-esque rip-off or clone...but minus the decent acting, effects and everything else. I mean look at that title, it speaks volumes about what your about to head into, you literally can't fail to understand what you should expect from something called this. And its those exact reasons why I decided to watch this movie...translation, sleaze fest...because who doesn't like a good sleaze fest now and then? Oh wait I already covered that angle. The plot is actually a slight mix of a few genres for starters. Obviously there is the outrageous, CGI filled, guns 'n' gore side of it which is clearly taking cues from certain Rodriguez movies. But then there is a slightly more noir-ish side to the tale, at times, its not a constant theme but its there. Then you have this clear comicbook-esque vibe about it, obviously more along the lines of 'Kick-Ass' and more so 'Sin City', there are also small nuggets of [i]Bond[/i] spoofing going on at times, and finally you that rather obvious grindhouse type quality about everything. So nothing of any originality to be found here lets be honest, although again, if we're honest, this did actually come out back in 2009 so I guess this may have been more original than I'm giving it credit for. The story is told with constant flashbacks to previous incidents that slowly build a full picture (gee I wonder where they got that notion from). I guess this could work if the flashbacks were any more coherent that the main plot segments but alas they're not. In fact they don't really add that much to the backstory at all really, they don't exactly clear up any plot holes...but tend to add more if anything! All they seem to do is give the director an opportunity to add in more gratuitous soft porn scenes involving his main female protagonists in different seedy locations, in very tight latex/scantily clad outfits (I'm not overly complaining about that though). You see all of the main plot is based out in the desert, all of the flashbacks are set in gritty, seedy, neon lit bars or alleyways in some city, so they just add seedy tits 'n' ass in a different location. The main story is basically a common as muck tale about these three women trying to locate some buried valuable items (not totally sure what actually) in the desert. The valuable items are of course property of some mega violent criminal mobster, who we only in name for the most part, and the three women are of course not entirely who they appear to be. Yep its the old ulterior motive type situation again, with the old twists, turns and back-stabbings that come along with it. The three protagonists are naturally very hot, very sexy, very firm and very delicious. One is an innocent, slightly submissive, weak, brunette stripper. The other is a tough, martial arts knowing, slightly ripped, very suspicious, dirty blonde, mouthy bitch. Finally, the leader is more of a calm, level-headed, stylish, classy red head who is definitely modelled after the classic, black and white noir detective flicks of the 50's. These three pretty much bicker and fight each other for the entire runtime as they try to locate this buried treasure. Every now and then you get the odd character turning up to attempt some level of suspense such as the cute young police officer who amazingly doesn't get fucked and used, even though you'd bet your last Dollar on it. What we do get is lots of close-ups on the girls faces showing their expressions (for some reason), lots of gunplay and gun sounds, lots of desert, lots of girly sexual innuendos, plenty of lesbian action (and I mean plenty), and a shittonne of tacky CGI and ultra tacky greenscreen effects. Hell we even get a full on wet t-shirt type sequence where all three women throw water over themselves in slow motion. And what Tarantino/Rodriquez rip-off/clone would be complete without a cute psychotic Asian woman in a micro miniskirt, pigtails and a unique deadly weapon in the form of a razor bladed yo-yo (she also has a very crazy Mad Max-esque partner). Oh and not forgetting the fact they even manage to crowbar in a gratuitous, nun in hot black PVC underwear, sequence too, you know...because its a top rated fetish with pervs (absolutely nothing wrong with that of course, he says with a broad grin across his naughty face). Lets be frank here (you can be Bob), as I said at the start we all know what we're getting into with a movie like this. You can see it on the cover, you can see it with the films title, you know what to expect and naturally you get plenty of it. The movie isn't pretending to be anything else, its set out its stall and its sticking to it, and with that I can't fault it really. not on that front. The movie wanted to be a sleazy, grindhouse type flick with bucketfuls of hokey, cartoonish CGI action sequences...and that's exactly what is it, at no point does the film hide from this. So all I can say is, if you enjoyed movies like 'Machete' then firstly you'll know where I'm coming from. Secondly, you'll probably enjoy this as its basically a lower budget version with (probably) more tits 'n' ass.

A trashy, over-the-top and deliciously sly exploitation flick that comes up as a bitch slap indeed, with three sexy big-breasted chicks kicking asses and firing huge guns in a stylish comic book universe and a clever narrative full of fun twists.

Bitch Slap is one of the worst films that I've seen in the last few years. The film tries to be like other comic book style films such as Sin City, but it fails. Bitch Slap is a boring, uninteresting film with poor acting, poor plot and directing. However the film does look cool, unfortunately that's not even enough to save this dreadful wreck of a film. The film could have been something good and entertaining, but the director doesn't know how to create effective action scenes or develop a good, engaging plot. Bitch Slap suffers from a poor script, and the potential is ruined on-screen. The film has nothing to offer. I was pretty bored watching this film, and you'd think with a title like Bitch Slap, you'd be in for a wild, crazy ride that's pure fun from beginning to end. Sadly, the film is quite bland. Bitch Slap is a missed opportunity to do something great as an action film. You'd think with a title like that, that the film would be awesome, unfortunately, it's not. The film is quite poor, and is a waste of time. The film tries to pull off the Tarantino/Rodriguez formula of Grindhouse but it fails to effectively create some sort of homage to the genre. The film is poorly done, really doesn't do anything to entertain you. The action scenes are dull, and uninspired. Where Grindhouse was fun film to watch, and was an effective homage to the Grindhouse films of the 70's, this one fails to deliver the fun that Grindhouse delivered so well. Bitch Slap is a slap in the viewers face, and really is not entertaining. The film is terrible and has nothing good or entertaining about it. The script sucks, the acting sucks and overall the film sucks. Avoid this piece of trash.

This was suppose to be a B movie but i think they took themselves too serious. Its a throwback exploitation film but it fails to live up to what those were or do anything really different. It shot in a highly stylized format though which does give it a very interesting visual appeal. But it really is bad :)