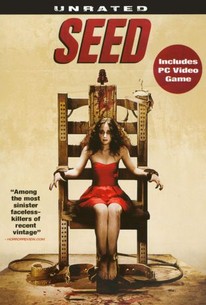 Based on an incident that allegedly took place in Seattle, WA, back in 1972, director Uwe Boll's Seed tells the twisted tale of a mass murderer who was buried alive after surviving the electric chair, and claws his way back to the surface in search of bloody revenge. According to U.S. law, any convict who somehow manages to survive three 15,000 volt jolts from the electric chair for 15 seconds is eligible to walk free. When notorious psychopath Sam Seed is strapped into the chair and asked for his last words, he simply replies by saying "I'll see you again." Later, after the electricity is sent surging through his veins and blood boils up through his eyeballs, Seed is still breathing. Realizing the dangers of letting such an unrepentant menace back on the streets, the executioner, Warden Wright, and the prison doctor conspire to skirt the law, and pronounce Seed dead. Subsequently bound and buried alive, the enraged Seed somehow manages to escape from his premature grave, and quickly sets out to prove just how alive he truly is.

Will Sanderson
as Max Seed

One for extreme gore connoisseurs, a Uwe Boll special. It's so appalling that it's worthy of an eve's viewing.

Say what you will about Saw 3 and Hostel 2, but compared to this malignant wreck, those (yes, harsh and brutal) horror flicks have the subtext of Shakespeare and the moral compass of Superman.

Before I've ever watched Seed, I had never heard of Uwe Boll. Then I looked him up on a whim after buying the DVD. The rating on IMDB for Seed was a 2.0, so of course I was like oh shit, what getting into. But I watched it, and to my surprise, and enjoyed this film. The film is raw, gritty and in your face. I've seen many Uwe Boll films, most recently Rampage, and I'd say along with Rampage, this is his best film. Putting into terms that the Horror genre is suffering from teen oriented remakes and tween romantic horror (Twilight), Seed is a totally different approach for a horror film. And boy is it refreshing. Uwe Boll when he made this film was dubbed a year earlier as the worst director in history since Ed Wood, in fact he was deemed worst than Ed Wood. So, Seed was of course in part a statement. In this film he holds nothing back, and makes a picture acks the viewing. The opening scenes are thoroughly disturbing, and set the overall mood and atmosphere of the film. Max Seed is a mass murderer with 666 murders to his name, and he's about to be executed for his heinous crimes. The plot is almost lifted from Wes Craven's Shocker, but is presented in a totally different light. The execution goes wrong and Seed is buried alive, only to reawaken and start a killing spree against those responsible. Seed is a good effort from Boll, and I view it as very original and as a breath of fresh air in the stale climate of today's horror. Considering this was made by Uwe Boll, most will dismiss it, but you shouldn't. I believe that even the worst directors can make watchable films. Seed should be seeked out by horror fans that are tired of tween oriented remakes and want a raw and intense horror film. Seed has many tense kills, the hammer scene as well as the baby scene and the end are highlights of this depraved picture. Uwe Bolll finding his way, and this one proves it.

Shocker!! Boll actually makes a good film hehe and believe me this is a pretty evil f***er!! when I say good I mean its not the jumbled run of the mill cgi nonsense you usually see, its actually a very nasty thriller which is FAR FAR nastier than 'Hostel' or 'Saw' believe me!! This film is nasty in the fact it actually has real footage from PETA (they actually gave Boll real footage for money, so much for their principles) of animal cruelty! (not very nice atall folks Sad ) plus dubious footage of bodies decaying with many rumours of wether they are real or not, looked pretty real to me. One scene has the killer Seed kill a woman with a small hammer/axe by brutally smashing her head apart!! its not cut and its not soft, its full on and very very uneasy watching, this is the closest to a snuff film you will see I think. The plot isn't original....killer is executed but comes back from the grave and gets his revenge, pretty standard stuff, I haven't played the computer game so I don't know how it compares (don't wanna play it either after seeing this!) but as a film its a very competant horror and probably overlooked due to the content. Nothing special really just a very gruesome film that is probably Bolls best but ironically will never get seen by the masses cos its too far, my god even the ending is nasty with no good outlook atall!! I was stunned and depressed after seeing this I tell you, be warned. On the plus side it has all the usual regulars from all Bolls other films haha hurrah for Michael Paré.

Just because you have the killer watching brutal real-life animal killings and you have the prolonged starvation death of an infant does not mean your movie is shocking. What it does mean is that you suck as a director and can only rely on cheap tactics rather than any kind of talent. Also it has one of the worst CG death sequences ever commited to film. Ever. Seriously.

I feel that I must address the director before his film due to the incredible amount of shit he receives from the internet by people who haven't even seen his movies (or just House of the Dead). Yes, it's Uwe Boll time. Considering the amount of pure crap that emanates from the horror genre, Boll is making better than average flicks. For the horror genre, Boll nowhere near deserves the level of hatred and criticism he gets. All that aside, let me move on to this actual film. There's alot not to like about this film. I wish steadicam or a tripod/dolly were occasionally used. The only steady shot is the "hammer scene" (I think it's more a mallet or the back edge of a small hatchet though), but halfway through the scene, the victim becomes CGI and the camera does some instazoom shot when the killer's weapon strikes the victims head; this zoom technique is not used when it is clearly the actor and too opaquely reveals even to an ignorant audience member that we have shifted from practical to digital effects. The scene starts out great, and ends great, but the middle is compromised due to poor CG. I cannot exactly tell in which time period the film is set as some of the set components appear as possible anachronisms. The plot is filled with holes, the first one being: I understand Boll is trying to echo the cliche use of 6's by sending only six cops to take down the killer, but in no time period is that a reasonable amount of force to send to apprehend someone who has murdered 666 people; it's unrealistic and a cheap reason to give the main protagonist stake in the killer's fate. I also don't think ANY institution executes and then buries immediately past the 1960s; the body would have been cremated by the state on an offsite area and not buried on the penitentiary property. The score is atrociously melodramatic and ineffective. There is still much to like here. This is the horror genre, so I can forgive some small leaps of continuity and logic as I just described as long as the extreme content can stand on its own. This stuff can. The movie begins with the killer watching real footage of people killing dogs (and it will sicken any sane human). You could accuse the director of using this as a cheap grossout trick, but I like to think of it this way: by showing real violence that disturbs, the director challenges himself to show you simulated violence that will disturb as much. In the final scene of the film, this is achieved and it bookends the movie well, elevating it a bit above its faults. It is a generally accepted rule of screenwriting that no matter how terrible your antagonist, you do not kill a child or family pet in a film; this film breaks both of those rules in the first five minutes. It does what every screenwriting guru says it will - makes the killer wholly unempathetic and will eliminate half of the audience due to immediate walkout (r in this case immediately stopping the DVD and tossing it back in the rental case). I've yet to encounter very many segments which can cause me to stop watching a film, so nothing stops me, especially not here. The killer's obsession with filming time-lapse decomposition is interesting and very cinematic but underutilized in terms of possible thematic resonance. It does serve to make for a fantastically bleak ending though. I'd encourage horror viewers to get over your preconceived notions of Uwe Boll and give this flick a try, as it has some great moments and it certainly not as shit as most low budget (or wide release) serial killer movies hurled at genre viewers. Fuck, it's hella better than Hostel and the bulk of the Saw series. "Most fucked up" highlight: the first scene and the final scene