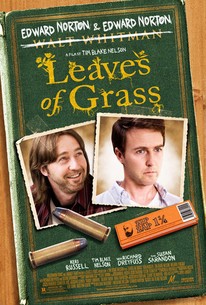 Critics Consensus: Edward Norton delivers one of his finest performances in Leaves of Grass, but he's overpowered by the movie's many jarring tonal shifts.

Critics Consensus: Edward Norton delivers one of his finest performances in Leaves of Grass, but he's overpowered by the movie's many jarring tonal shifts.

Critic Consensus: Edward Norton delivers one of his finest performances in Leaves of Grass, but he's overpowered by the movie's many jarring tonal shifts.

When Ivy League classics professor Bill Kincaid receives news of the murder of his estranged identical twin brother, Brady in a pot deal gone bad, he leaves the world of Northeastern academia to travel back to his home state of Oklahoma. Upon arrival, he finds that reports of his brother's death are greatly exaggerated, and he's soon caught up in the dangerous and unpredictable world of drug commerce in the backwaters of the Southwest. In the process, he reconnects with his eccentric mother, meets a wise and educated young woman who has bypassed academia in favor of the gentler rhythms of life, and unwittingly helps his troubled brother settle a score with a pernicious drug lord who uses Tulsa's small Jewish community for cover.

Chris Freihofer
as Doctor
View All

Critic Reviews for Leaves of Grass

I could only bear 35 minutes, and I haven't walked out of anything since 'You, Me and Dupree.'

An offbeat thriller that is deepened -- rather than derailed -- by its tricky shift from darkly funny to just plain dark.

It's a jarringly realistic hybrid that echoes the more surreal aspects of real, rural life, and Norton walks/ambles through it all, sporting dueling personalities and distinct accents, but one very serious heart.

The mirror image gag is one of the oldest in the book, and yet, if done well, it never really gets old.

As a writer-director, Nelson keeps the laughs coming at a steady pace, and never condescends to his articulate redneck characters.

Mr. Norton is a pleasure to watch, and so is everyone else.

Maybe too small-scale to be anything truly special, but an original and witty film that both surprises and entertains.

Essentially Deliverance cross-bred with A History of Violence...Leaves of Grass is a peculiar rural yarn and a sweet, assured examination of lost innocence and brotherhood that succeeds largely because of Norton's multi-faceted performance.

This is a very personal film from Nelson that is jam packed with ideas and heavily influenced by the Coen Brothers...

The DVD extras give the film a boost with a well done "making-of…" featurette and a commentary of the film by director Nelson, star Norton and producer William Migliore.

Many clichés in uneven and odd mix of guffaws and philosophical analysis. . .[C]onsiderable violence surprisingly erupts...[M]ost fun is watching Norton interact with Norton.

Audience Reviews for Leaves of Grass

Starts out as a silly comedy than takes a disastrous turn about an hour in and crashes and burns.

Very nearly an excellent movie: a by times funny Good Brother vs. Bad Brother story that plays into that famous Amercian trope: You Can't Go Home Again. Another project that I'd put on Edward Norton's recent Why-The-Heck-Did-You-Pick-This-One? List, but one in which he capably plays both twins - despite himself, he's remained a good actor. Where this one goes awry, I think, is in Tim Blake Nelson's desire to have it feel like a Coen Brothers film. The humour's dark, and the plot's all over the place, but the final third's zaniness kind of lost me... just in time for the predictable, cheesy love story ending. A film that's not quite sure what it wants to be, and one that's quite justly polarizing to critics and audiences alike.

Because of this film's mixture of wild, wacky characters, crime drama, stoner comedy, nutty plot, and philosophy, it would be understandable if you confused this with being a film made by the Coen Brothers. It's not, but its writer/director/co-star Tim Blake Nelson did work with the duo, so maybe that might account for the similarities. As a Coen clone (which I don't think it's trying to be, or should be labeled as), it's okay, but it fares better when looked at on it's own terms. Bill Kincaid (Edward Norton) is a professor of classical philosophy at Brown University whose career is at a crossroads. When he gets a call informing him that his estranged twin brother Brady- a goofy, redneck genius pot grower and seller (also played by Norton) has been murdered by a crossbow in a drug deal gone awry, he journeys home to Little Dixie , Oklahoma (the place he was happy to leave) to attend the funeral. When he gets there though, Bill discovers that he has been misinformed, and finds himself caught up in his brother's shenanigans which not only could put them both at risk, but could also finally help Bill discover what it truly means to be happy. Based on the concept and casting alone, I was hooked. This is a really fun, and funny movie. Nelson really knows the material well (He's from Tulsa and studied classical philosophy at Brown), so the film is actually pretty accurate, even if slightly exaggerated. The film may not be totally original (again, it's very Coenesque at times), but it's well played, and never boring. The plot does get kinda messy, and the tone is a little uneven at times (maybe the comedy should have been blacker), but all in all, this is a highly entertaining film that made me feel a little better about life and myself for having watched it. So yeah, there's some flaws, but what really saves the film is the awesome casting and terrific performances. Norton is a real delight here. He's never been a bad actor, but this gives him the tough challnege of trying to pull off two very different characters who spend a lot of time engaging with one another. Thankfully, he pulls it off nicely. Nelson gives himself the fun, but familiar role of Brady's best friend Bolger, who, like Brady, is a good old boy who loves pot, is a proud redneck, but a lot sharper than he seems. Susan Srandon has some fun as Bill and Brady's eccentric mother Daisy, and Melanie Lynskey seems to be enjoying herself as Brady's pregnant girlfriend/soon to be wife. She's good, but it would have been nice to see more of her. As a potential love interest for Bill we have Keri Russell as Janet- a free spiritied poet who loves to go noodling and recite Walt Whitman while gutting catfish. The love subplot between Janet and Bill is kinda one of the weaker parts of the film (it could have been done better), but it's not bad enough to sink the film. In a really small, but wonderfulyl odd role is the great Richard Dreyfuss as Pug Rothbaum- a menacing antagonist who threatens Brady's criminal enterprises. All in all, this is a weird, crazy mess, and it shouldn't really work, yet it somehow all does come together. It could be better, but for what it is, this is quite hilarious, a bit profound, and a real joy to watch. Give this one a look.

I'm a big Edward Norton fan. "American History X", "The Score", "Primal Fear" are all three great movies, anchored by Norton. Even his take on playing "The Hulk" was fantastic. However, even he doesn't make great movies every time out. "Leaves of Grass" is about twin brothers Bill and Brady(both played by Norton). Bill is an Ivy league professor ashamed of his past, not wanting anything to do with his brother, mother or anyone from Oklahoma(where he was from). Brady is still in Oklahoma and is a pot grower. Brady has a fiancee and a baby on the way and ends up in a jam involving a drug kingpin(Richard Dreyfuss). Needing help, Brady tricks his brother into returning home to get him out of his situation. Norton does great in the dueling roles. He uses a great southern accent for Brady, and u believe there really is two of them. The problem with the movie isn't really Nortons fault, it's more of the story/direction. The ending is kind of odd, and in my opinion, doesn't really fit with the rest of the movie. This could have been a really good comedy, instead it's just a less than average drama. Worth a watch if your a Norton fan, if not then you would probably be better off to skip it.