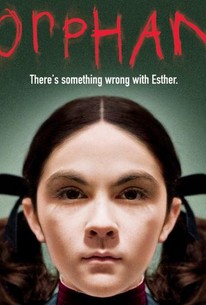 Critics Consensus: While it has moments of dark humor and the requisite scares, Orphan fails to build on its interesting premise and degenerates into a formulaic, sleazy horror/thriller.

Critics Consensus: While it has moments of dark humor and the requisite scares, Orphan fails to build on its interesting premise and degenerates into a formulaic, sleazy horror/thriller.

Critic Consensus: While it has moments of dark humor and the requisite scares, Orphan fails to build on its interesting premise and degenerates into a formulaic, sleazy horror/thriller.

The tragic loss of their unborn child has devastated Kate and John, taking a toll on both their marriage and Kate's fragile psyche as she is plagued by nightmares and haunted by demons from her past. Struggling to regain some semblance of normalcy in their lives, the couple decides to adopt another child. At the local orphanage, both John and Kate find themselves strangely drawn to a young girl named Esther. Almost as soon as they welcome Esther into their home, however, an alarming series of events begins to unfold, leading Kate to believe that there's something wrong with Esther-this seemingly angelic little girl is not what she appears to be. Concerned for the safety of her family, Kate tries to get John and others to see past Esther's sweet facade. But her warnings go unheeded until it may be too late--for everyone.

Collet-Serra's film succeeds in being genuinely creepy, is commendably well acted by all concerned, and contains the best twist since The Crying Game.

Director Jaume Collet-Serra (House of Wax) endows this ugly mess with a slew of unintentional laughs, but not enough to repay the 123-minute time suck.

One of the good things about ORPHAN, which is directed by Jaume Collet-Sera, is that it takes itself quite seriously and manages to bring a surprising level of originality to the potentially familiar material.

Lifted above the average by a pretty nifty twist and some unnecessarily good acting.

It has atmosphere and tension, and the performances are far better than usual for this sort of caper.

Orphan's protracted runtime is exacerbated by how unlikable Sarsgaard's character is, but you have to admire the audacity (and unpredictability) of the ending.

Aryana Engineer, a real-life deaf actress, is almost equally as hypnotic as Fuhrman without uttering a single word throughout the film.

Orphan is refreshing for its skilled execution and genuinely disturbing atmosphere that permeates every scene.

A creepy, yet fun, alternative to a testosterone-filled summer, a small but effective little thriller that features some strong performances and a neat little twist that makes it a cut above most horror films.

It does squander a strong setup though with an increasing amount of camp.

I hope I don't develop any brain damage after watching this awful piece of crap that goes for every single ridiculous cliché of horror movies: from stupid scares even when there is nothing to be afraid of to the most irritating idiocy of nobody ever believing the main character.

The evil child coming to a household that has it's own demons from the past to deal with is such a well known movie trope, that it's hard to imagine a film having much too add to the genre. And this one doesn't really. The tension builds slowly and you actually feel bad for the well acted child antagonist for a while. As things get more bloody, the film becomes less believable, but at least the twist adds some very fresh spice to the mix and doesn't have to rely on any supernatural element. The showdown is exciting even if a little unbelievable. Overall pretty entertaining and while never particularly scary the film has its moments of tension.

Like most scary movies, their successes lie in the climatic way they are filmed. This movie has scene after scene that are very suspenseful and thrilling. Overall, I really liked it, and that says alot since I'm very picky with scary movies.