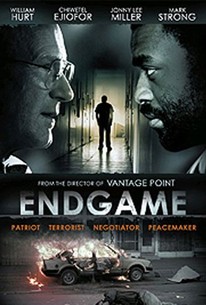 The African National Congress (ANC) wages an armed struggle against apartheid; President P.W. Botha clings to the last threads of power; the country is on the brink of bloody insurrection. In a gripping thriller based on real-life events, Endgame drops us into this brutal conflict's control centers: Nelson Mandela's prison, Botha's chambers, ANC headquarters, and, to our surprise, the rented car of a British bureaucrat. It turns out that Consolidated Gold, a British mining concern, convinced that peaceful resolution in South Africa serves their interests, has initiated covert, unofficial talks between opposing sides.

William Hurt and Chiwetel Ejiofor, impressive at opposite ends of the table as a government mouthpiece and a philosophy professor, provide all the fireworks the story needs.

What sparks are felt throughout come largely from Hurt and Ejiofor, who both seem to understand exactly the type of talky, tentative movie they're in and do their best to bring in some glints of humor and uncertainty.

The principals, especially Ejiofor, rise above the starchiness that often hampers portrayals of recent, monumental history.

...crafts a crackling thriller out of the tangle of crafty maneuvering that ended apartheid.

An inspirational tale chronicling the contributions of a few unseen players in the South African struggle for independence.

There is just too much information to absorb in one sitting.

There's nothing in Endgame that's less than proficient.

Starchy telling of the behind-the-scenes meetings that contributed to the end of apartheid in South Africa. A car chase, a car bombing and some flashy camera work are offered in attempt to liven up the avalanche of talking heads but to nooo avail.

In "Endgame," Consolidated Goldmines representative Michael Young(Jonny Lee Miller) fails miserably at his first attempt at making contact with the ANC in a South African township in 1985. A year and a half later, he has decidedly more success in London with Thabo Mbeki(Chiwetel Ejiofor) and gets him interested in peace talks. However, finding an Afrikaan representative proves to be even harder, as their livelihoods depend on Apartheid. But Professor Will Esterhuyse(William Hurt) will give it a shot. And that is even as he is approached by Dr. Neil Barnard(Mark Strong) of the National Intelligence Services to report back to him. At the same time, Dr. Barnard is talking with Nelson Mandela(Clarke Peters). "Endgame" is well-acted by an excellent cast. The film moves along like a first class political thriller, even if some of the dialogue is clunky at times, while detailing a little known, but important, piece of history. It does a very good job of illustrating the point in a conflict when guns must be put aside, after so much damage has been inflicted on both sides, and the talking to begin. But that cannot really start until the fear and hatred that have been building over generations have been overcome. In this case, the blacks hate their oppressors while the minority Afrikaans fear for their future. What is scary for me is the meetings are arranged by Consolidated Goldmines, not out of the kindness of their hearts, but for business' sake as peace guarantees continued profit. Later, corporations will have influenced post-Apartheid South Africa in a negative direction, as detailed by Naomi Klein in her book, "The Shock Doctrine."

"Patriot. Terrorist. Negotiator. Peacemaker." A story based on the covert discussions that brought down the Apartheid regime in South Africa.

REVIEW
Shot in a manner very resonant of Frost/Nixon with outstanding editing Endgame is a fittingly unsentimental and very nicely played drama of the last days and brinkmanship of the apartheid negotiations in South Africa. With competent performances from all involved this is not overacted but rather relies on the relationships and the materials. Cutting between South Africa and the UK it tells the story of the two sides: the Afrikaans government on the one, and the ANC and Pan-African parties on the other. How they came to find a path in what was probably the most volatile of all post-colonial politics to not lead to civil war is the story. Through the efforts of an Afrikaans philosophy professor (William Hurt) and a British troubleshooter for the gold mines (Johnny Lee Miller, who is in excellent form, less manic suits him very well indeed) the players first arrange to meet, meet, and work through the issues. Filmed in South Africa (A lot of outdoor shots) and the UK, this has more story than you'd think on first sight. It has some action scenes, but in the main it is a nicely poised political drama.