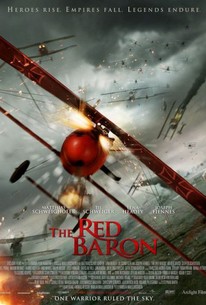 Critics Consensus: It doesn't lack ambition, and it boasts undeniably thrilling source material, but The Red Baron is brought down by its overly sentimental script and a number of historical inaccuracies.

Critics Consensus: It doesn't lack ambition, and it boasts undeniably thrilling source material, but The Red Baron is brought down by its overly sentimental script and a number of historical inaccuracies.

Critic Consensus: It doesn't lack ambition, and it boasts undeniably thrilling source material, but The Red Baron is brought down by its overly sentimental script and a number of historical inaccuracies.

Baron Manfred von Richthofen is the crack pilot of the German aerial combat forces -- a legend in his own time, a hero at home and a man both feared and respected by the enemy. The provocative red paint job of his Fokker aircraft earns him the nickname 'The Red Baron'. Unwittingly, he allows the German high command to manipulate his chivalrous code of honor and misuse him for propaganda purposes until a beautiful and resolute nurse opens his eyes to the tragic fact that there is more to war than dogfights won and adversaries downed. Baron von Richthofen finally becomes aware of his role in the propaganda machine of a senseless and barbarous war.

Til Schweiger
as Werner Voss

If the film is intelligent and thoughtful, it is unfortunately lacking in energy and passion; it is more a somber, highly familiar reflection on warfare and its toll than an action movie.

Drama about World War I flying aces never gets off the ground.

His plane may be red, but the dialogue is purple.

The propaganda films produced by both sides in the '30s and '40s might've been objectionable for many reasons but at least they had the good sense to show real planes in action.

Nikolai Müllerschön's film about the German flying ace has nothing like the sort of flair it needs to get away with its sentimental departures from the historical facts.

One can see how its overtly soapy, lowest-common-denominator antics would play comfortably in various climes.

A stodgy but good-looking war film, with many stirring scenes of aerial combat.

Alas, this BARON is barren, more dead than red.

Red Baron leaves Manfred von Richthofen a lifeless cliché of Aryan grandeur, stuck inside of a film that tries too hard to dazzle without fully exploring the possibilities of the legend.

Embraces embellishment and outright falsehood in search of soap opera.

An ambitious young man in his flying machine

Great German movie. Historical biographies are some of my favorite kinds of movies, and this is a really well done one.

Well its an alright movie, gives me goosebumps! Its a sweet enough movie thats entertaining to a point! It is slow and boring in places and it does strain to keep you interest but then an interesting scene will come along that then continues to make you watch the movie. Its an alright war movie, certainly room for improvement!

Before I saw this, I didn't really know much about the man behind the legend of the Red Baron, except that he was an exceptionally skilled pilot and one of the best of his time. In that sense, I found the story pretty interesting, especially as I've always been a sucker for war movies in general. Unfortunately though, it wasn't as good as I had hoped it to be. The cinematography is great and the action sequences very well-made (especially the aerial battles, which is among the best and most thrilling I've seen in recent memory), but in the acting department it left a lot to desire. It's not bad, but I just found the cast to be very pale and boring. I was also very bothered by the fake-sounding accents, which to me came off as very strained and unnatural. But other than that it's a decent war flick. Certainly no candidate for the Oscar's, but worth seeing for it's well-directed action scenes.