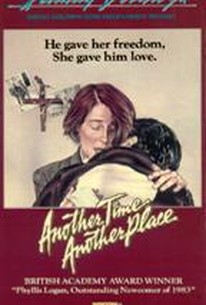 Another Time, Another Place Photos

This story of a World War II romance in the Scottish highlands develops in a gradual but lyrical manner as Janie (Phyllis Logan), a Scottish woman married to a cold and remote man, starts an affair with Luigi (Giovanni Mauriello), an Italian confined to Janie's small community until the war is over. Luigi has two other compatriots to keep him company, but none of the Italians speak English, and life in exile is lonely. Although the townspeople continue to distrust the Italians, Luigi and Janie are kindred spirits, so when they meet, their mutual need is unconsciously acknowledged and sparks are ignited. Whether an illicit wartime romance will endure or not, that is another question entirely. ~ Eleanor Mannikka, Rovi

Critic Reviews for Another Time, Another Place

A compelling tale of forbidding love.

There are no featured reviews for Another Time, Another Place at this time.

Another Time, Another Place Quotes