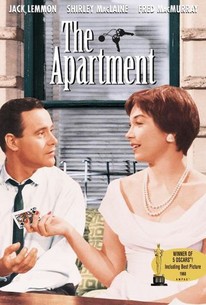 Widely regarded as a comedy in 1960, The Apartment seems more melancholy with each passing year. Jack Lemmon plays C.C. Baxter, a go-getting office worker who loans his tiny apartment to his philandering superiors for their romantic trysts. He runs into trouble when he finds himself sharing a girlfriend (Shirley MacLaine) with his callous boss (Fred MacMurray). Director/co-writer Billy Wilder claimed that the idea for The Apartment stemmed from a short scene in the 1945 romantic drama Brief Encounter in which the illicit lovers (Trevor Howard and Celia Johnson) arrange a rendezvous in a third person's apartment. Wilder was intrigued about what sort of person would willingly vacate his residence to allow virtual strangers a playing field for hanky panky. His answer to that question wound up winning 6 Academy Awards, including Best Picture, Best Director, and Best Original Screenplay. The Apartment was adapted by Neil Simon and Burt Bacharach into the 1969 Broadway musical Promises, Promises. ~ Hal Erickson, Rovi

Joyce Jameson
as The Blonde

News & Interviews for The Apartment

View All The Apartment News

Critic Reviews for The Apartment

"Some people take, and some people get took," Bud says, and The Apartment never wavers in condemning the former and aligning itself with the latter.

While the mordant ruthlessness of the asides at the expense of big business intrigues, indiscretions and Christmas parties is compromised by a final sequence of quite awful sentimentality.

All this is quite a load for a comedy, but where else has social comment ever been so effective? Wilder hones his points to a piercing edge...

Production and direction wise, Wilder sustains his usual excellence. But his story is controversial and I am not one of those who can quite see The Apartment as the great comedy-drama he evidently intended it to be.

...despite all its cynicism, The Apartment still ends on a hopeful note...

Wilder, a bilious and mercurial wit, here becomes a wide-screen master of time ...

...a stylish comedy that only grows more and more captivating as time progresses...

It remains a controversial, heavy-hitting classic from an auteur whose filmography is filled with them.

Balancing the comedy and drama is perhaps the film's finest achievement, maintaining a synchronization that keeps the story alternately funny and poignant.

It somehow manages to be both sardonic and warmhearted while observantly focusing on the romance...

A black-hearted satire this smart, cutting, and hilarious is good even if it can't quite find a way out of its nihilism.

Audience Reviews for The Apartment

A deeply involving dramatic romance with great dialogue and three-dimensional characters (even if the plot is a bit predictable), and it is quite a curious thing that this film is labeled by many as a comedy when in fact it is so melancholy and rather heavy in tone.

Along with Ernst Lubitsch's The Shop Around the Corner, Billy Wilder's 1960 Oscar-sweeper The Apartment elevates the workplace romance into a sublime erotics of officious addresses (the omnipresent Mister and Miss) and economic conundrum. In this film, actuary C.C. Baxter (Jack Lemmon) sleeps his way up the Consolidated Life ladder by proxy, as philandering execs use his 67th Street digs for scheduled romps. Meanwhile, Fran Kubelik (Shirley MacLaine), the elevator operator he chivalrously fancies, can't get personnel czar Sheldrake (Fred MacMurray) out of her mind. The triangulation keeps its edges with on-your-toes dialogue and a fine-tuned critique of corporate culture. Lemmon navigates the line between simpering and sympathetic with nervous WASP-ish energy. Most indelibly, MacLaine gives us a gamine with the whole gamut of emotions, a cursed capacity to love, and a limit to her own self-pity. As in Shop, Christmastime and suicide mingle, and the name "Kubelik" has the old-world ring of Kralik, Matuschek, et al.; Baxter's Jewish neighbors put him on the road from schnook to mensch (perhaps this is Wilder responding to the critique that he wasn't Jewish enough?). And Billy again pulls of his trademark feat of finding pathos in taboo subjects. He had a sign in his office that read, "How Would Lubitsch Do It?" and here that director's elusive touch hovers over the proceedings, lending a lightness to even the most mercenary transactions. A classic in the truest sense of the word.

Lovely movie. Without knowing it from each other, C.C. and Fran are both jerked around by selfish and arrogant men. What I liked about it is that it doesn't turn into a sugary romantic movie, the characters stay true to themselves.

Looking solely at the premise, I find it really funny that a film about a lonely office drone who pimps out his apartment to his superiors as a way of getting ahead in the corporate world won the Oscar for best picture. In all seriousness though, this is a wonderful satirical dramedy that, like a lot of Billy Wilder's films, pushed forth a mature subject, and made no qualms about doing so. The film gets more serious as it goes on, but the first half is really pretty funny, and it's just a joy watching Jack Lemmon act all harried and whatnot. He gives a great performance, as do Shirley MacLaine and Fred MacMurray, even though no one is the cast is bad. I rather like that, perhaps due to the time period, this film leaves much to the imagination- something that probably wouldn't happen if it were made now. Everyone, and not just the actors, are firing on all cylinders here