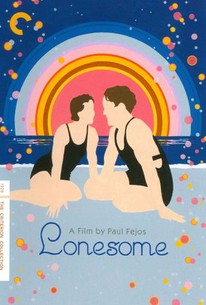 Two lonely people discover short-lived happiness in this silent drama. Jim (Glenn Tryon) and Mary (Barbara Kent) live in the same rooming house in New York City, though they've never met; Jim works in a metal fabricating plant, and Mary runs a switchboard for the telephone company. While both have friends, they both long for something more in their lives. One afternoon, Jim decides to go to Coney Island to see the famous amusement park, and on the bus he spies Mary. Jim finds her attractive, and eventually works up the nerve to introduce himself on the beach. The two discover they share a mutual attraction, and over the course of the day Jim and Mary fall in love, while a visit to a fortune teller suggests to Mary that she's met the man who will become her husband. However, Jim and Mary are separated, and despite their best efforts the two don't know how to find one another again. Lonesome was released in 1929, as silent films were giving way to talking pictures; the picture was originally released silent, though it was soon reissued in a version with sound sequences.

Glenn Tryon's performance is skillful and intelligent, sympathetic and sincere.

The story is relegated to comparative obscurity behind a maze of superimpositions, dissolves and other tricks of the camera.

Some of the photography and the basic appeal of the theme saves it for a time, but for the main Lonesome drags and ultimately peters out.

Lonesome, Paul Fejos's exquisite, poetic 1928 masterpiece about love and estrangement in the big city, deserves to be ranked with The Crowd as well as Sunrise, though it's not nearly as well-known as either.

Dr Fejos has paid more attention to his interesting dissolves and double exposures than he has to the characterization of his story.

[Lonesome] shows many extremely interesting and suggestive effects such as the combination of a number of independent images within the same frame. It is marred by an unnecessary talking sequence.

An irresistible bon-bon of a movie, a lovely, effervescent celebration of love that is so refreshingly unironic that it may seem a bit naive to modern audiences, but that is merely part of its allure.

Although to a large extent the two characters are basic archetypes, as a writer and director Fejös has a poet's touch when it comes to the details of phrase and gesture.

This was Universal's first sound film with only three dialog scenes (all on the beach).

It's perhaps the ultimate film in urban alienation.

In the end, I'd call Lonesome a truncated masterpiece, with footage rudely added rather than stripped away.

The plot is simple: A boy and girl (both "working stiffs") find innocent love at an amusement park, only to have their new romance threatened by casual circumstance. Nothing too interesting there. What is interesting is Paul Fejos's amazing, shoot-the-works direction, which includes dizzy editing, lots of multiple-image layering and even a splash of color (in 1928!). Definitely a film ahead of its time. The release year is also crucial because this was the transitional period between silents and talkies, thus there are three sound scenes of dialogue squeezed into the action. Some film buffs will say these are unwanted and awkward, but no real harm is done and some necessary plotting is delivered. A magical film, breezing by in under 70 minutes. Why is "Lonesome" so poorly known today?