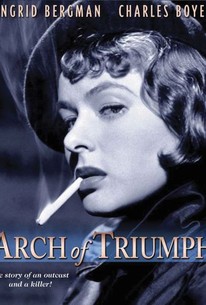 Based on the novel by Erich Maria Remarque, Arch of Triumph is a complicated war romance directed by Lewis Milestone. Dr. Ravic (Charles Boyer) is a refugee physician practicing medicine illegally in Paris under a false name. He saves Joan Madou (Ingrid Bergman) from committing suicide after the sudden death of her lover. He gets her a job singing at the nightclub where his only friend, Boris Morosov (Louis Calhern), is the doorman. Joan falls in love with Ravic, but he is deported and she finds herself the mistress of wealthy Alex (Stephan Bekassy). Meanwhile, Ravic seeks revenge against a Nazi officer (Charles Laughton) and war is declared between France and Germany.

Peter Virgo
as Polansky
View All

Critic Reviews for Arch of Triumph

There are no critic reviews yet for Arch of Triumph. Keep checking Rotten Tomatoes for updates!

Audience Reviews for Arch of Triumph

Arch of Triumph is not a bad film but it does not come together well. I can recommend it to those that enjoy films from that era. As a romance I do not believe it works and do not find the co-stars to be a good pairing. The leading man is stiff and is no Bogart or Grant. Despite the disappointment, I don't want to take away too much from the film as it did keep my interest throughout.

For a film with such a superior cast and a quality director this is a dull and ponderous picture. Seemingly endless the story it tells could be compelling but somehow comes off hollow and trite. The dreariness of it is compounded by the overly dark lighting which in particular manages to make the beautiful Ingrid look terrible but does no favors to anyone.

A boring drama, I don't even remember the story, if there was one. It wasn't all bad, though, it has some good actors.