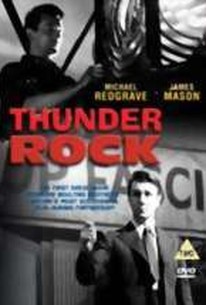 Robert Ardrey's theatrical semi-fantasy Thunder Rock was transformed in 1944 into one of the most successful British films of the year. Michael Redgrave stars as a disillusioned war correspondent, David Charleston, who shuts himself away from society by taking up residence in a Lake Michigan lighthouse. During one particularly stormy evening, Charleston's solitude is invaded by several strangers, all dressed in 19th century costume. It develops that these strangers are the ghosts of immigrants whose ship went down some 100 years earlier. Through their optimistic example, Charleston renews his own spirits and gives the world a second chance. When Thunder Rock threatens to get too ethereal for its own good, it is brought back to earth by the sardonic presence of James Mason, playing a live visitor to the lighthouse who spars both verbally and physically with the self-pitying Charleston. ~ Hal Erickson, Rovi

Miles Malleson
as Chairman of Directors

Alfred Sangster
as Director
View All

A gripping wartime propaganda fantasy film that was based on the anti-isolation play of Robert Ardrey.

Caught this about a 1/2 hour into it, so wasn't entirely sure what was happening. The story progression filled it in pretty well, and it turned out to be pretty decent. Kinda pessimistic at first, as each character is disillusioned by their efforts to improve humanity's lot being met with fear, suspicion and disdain, so give up rather than fight. But I think it's ultimately teaching the viewer that it is that very attitude that should keep us going -- that we shouldn't let others opinions of us deter us in our goals. Michael Redgrave, whom I'm liking more and more, did a good job. The film suffered just a bit with the corny "new lease on life" ending. But otherwise, a film to make you think.