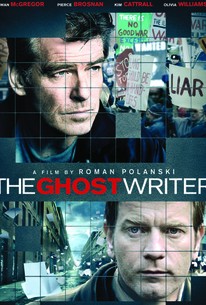 Critics Consensus: While it may lack the revelatory punch of Polanski's finest films, Ghost Writer benefits from stylish direction, a tense screenplay, and a strong central performance from Ewan McGregor.

Critics Consensus: While it may lack the revelatory punch of Polanski's finest films, Ghost Writer benefits from stylish direction, a tense screenplay, and a strong central performance from Ewan McGregor.

Critic Consensus: While it may lack the revelatory punch of Polanski's finest films, Ghost Writer benefits from stylish direction, a tense screenplay, and a strong central performance from Ewan McGregor.

When a successful British ghost writer, The Ghost, agrees to complete the memoirs of former British Prime Minister Adam Lang, his agent assures him it's the opportunity of a lifetime. But the project seems doomed from the start-not least because his predecessor on the project, Lang's long-term aide, died in an unfortunate accident. As The Ghost works, he begins to uncover clues suggesting his predecessor may have stumbled on a dark secret linking Lang to the CIA-and that somehow this information is hidden in the manuscript he left behind. Was Lang in the service of the American intelligence agency while he was prime minister? And, was The Ghost's predecessor murdered because of the appalling truth he uncovered?

Ewan McGregor
as The Ghost

Alister Mazzotti
as Protection Officer No. 1

John Keogh
as Protection Officer No. 2

Hans-Peter Sussner
as Protection Officer No. 3

Stuart Austen
as Protection Officer No. 4

Andy Güting
as Protection Officer No. 5

Robert Wallhöfer
as Protection Officer No. 6

Julia Kratz
as Woman with Bullhorn

News & Interviews for The Ghost Writer

View All The Ghost Writer News

Critic Reviews for The Ghost Writer

This isn't a great film. You won't carry it around in your heart for years to come... But it'll keep you with it right to the very end, which has to be worth something. It may even be worth quite a lot.

The dialogue and suspense created by director Polanski are first rate. You will enjoy this film.

In the total context of Polanski's hard life and grim ordeals ... The Ghost Writer constitutes a miracle of artistic and psychological resilience.

Polanski has made a genre piece with a verve and vitality that's in sadly short supply.

It is good to see Polanski exercising his gift for the sinister. It's a spooky world he evokes here but its architecture doesn't hang together, which is a great pity.

But for fans of the auteur able to separate his personal life from his cinematic one, and for others open to old-school suspense where no one gets away clean and failure truly is an option, this political whirligig delivers the goods.

It's the kind of film that comes along all too rarely, and you find yourself hoping it won't be his last.

Watching Blair's thinly disguised surrogate get put through the wringer in The Ghost is probably the closest we'll ever get to see him face retribution for his follies and crimes.

Perhaps the most prominent interest in the film will be for the controversy Polanski has gotten himself into in his personal life.

...succeeds both as a popcorn movie and as a work of political criticism...

It's an overripe conspiracy thriller knotted with an unlikely twist. But it's certainly compelling enough. The suspense is taut. Riding this hairpin narrative with McGregor at the wheel is a lot of fun.

A good, old-fashioned suspense yarn that culminates with one of the most haunting final shots in years.

Audience Reviews for The Ghost Writer

An engaging and tense thriller with an intriguing mystery and a stylish direction that brings to mind Polanski's finest works, and some scenes here are spectacular, especially the final sequence, while Ewan McGregor puts in a very strong performance.

A populist ghost writer is employed to rewrite the memoirs of a former Prime Minister but when the politician is accused of war crimes, he becomes increasingly fearful for his safety. The Ghost is a very old school cold war style political thriller that is based upon a character who is purely fictional and in no way represents anyone living or dead - especially not Tony Blair, nosiree Bob. Roman Polanski has always had a knack for paranoid conspiracy thrillers and this understated yet suspenseful example follows very much in the footsteps of Hitchcock, revolving as it does around an everyman protagonist who finds himself completely out of his depth when he blunders into intrigue. Although it is set mostly in America, The Ghost has quite a European flavour with a quality cast of character actors who utter dialogue that actually sounds like the words of English people (for a change) and there's no superficial flash or irrelevant action sequences. The one major flaw is the rather glib twist at the end which makes the film feel a little insubstantial in the final analysis but a likeable performance by Ewan McGregor and some nicely judged political intrigue makes the journey there well worthwhile.

Ewan plays a ghost writer who takes up a job to ghost write the memoirs of the ex British Prime Minister Adam Lang (Pierce). Ewan's predecessor and former aide of Lang died in an unfortunate accident. Lang is accused of ordering the torture of terrorists and is being investigated for war crimes. Ewan tries to discover the truth behind the rise of Lang to power and connections with the CIA. It's a very interesting plot but it takes a long time to get to the revelations. Good cast. He movie reminded me of Frost Nixon and Michael Clayton.

A deliberately paced and well rounded political thriller with strong performances and gorgeous cinematography. I found myself staring into the background and taking in the scenery quite a bit during the scenes. This isn't one of those thrillers were someone is on the run the whole time, though. Ewan McGregor is a newly hired ghost writer for a former British Prime Minister who took the place of the last one that was really close to the family when he showed up on the shore of the beach dead. Everyone thought it was just an accident, but was it? As he continues to dig into the past and present of the former British Prime Minister, he discovers shocking secrets that threaten his and the entire nations safety. The Ghost Writer does a good job of keeping things hidden and revealing them little by little to keep your interest during many scenes consisting of nothing but two characters interacting through dialogue. The writing is very good, which helps. There's a few spots where it drags, but nothing bad and it still managed to hold interest throughout. If you are one of those people who likes your thrillers with a little less adrenaline and a healthy does of dialogue and political intrigue, this one is right up your alley.