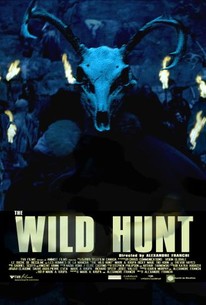 A day of high-spirited fun takes a turn into darkness as a game becomes all too real in this comedy drama from Canada. Erik (Ricky Mabe) and his girlfriend, Lyn (Tiio Horn), are both interested in Live Action Role Playing games, in which teams of players assume the guise of particular characters and act out mock battles as part of a fantasy scenario. However, Lyn begins developing a stronger interest in the game than Erik, and runs off for a weekend of play without bringing him along. Depressed, Erik and his brother Bjorn (Mark A. Krupa) set out to catch up with her as their friends impersonate a horde of Viking warriors. Bjorn brings along his "Hammer of Thor" as well as Murtagh (Trevor Hayes), who takes his role as a shaman more than a bit seriously. As the day wears on, Erik's frustration is reflected in his mates, and what began as an afternoon of fantasy and adventure turns into a battle where the blood and wrath are very real. The Wild Hunt was the first feature film from writer and director Alexandre Franchi, who co-wrote the screenplay with actor and writer Mark A. Krupa, who plays Bjorn. ~ Mark Deming, Rovi

Martin Stone
as Magnus (The Father)

Nicholas Simard
as Viking #1
View All

Critic Reviews for The Wild Hunt

Nice performances, interesting ideas and intriguing visuals aside, the final product is as cold as the environment its set in, and as such my medieval instincts are to urge people to ultimately leave this particular picture alone.

The acting is effective, the direction by Alexandre Franchi is confident, and the cinematography by Claudine Sauve could hardly look more assured.

More entertaining in concept than execution.

This film brimming with conviction. And it pulls off an unlikely stunt-carving an intense, authentic, ultimately harrowing drama out of what first seems like a potentially risible world of medieval make-believe.

This film moves a little slowly, but the ending is totally worth the wait. Make sure you watch through the credits too!

As the rules and careful structures that govern the action go up in a blaze of real violence, human nature in all its elemental ferocity is revealed. This unmasking is both terrifying and oddly thrilling.

Rough around the edges, but The Wild Hunt is thoroughly entertaining, engaging and even a bit tense.

A psychological thriller highlighting how hell hath no fury like a frustrated knight in shining armor, even if he only has a plastic sword at his disposal!

First-time feature filmmaker Alexandre Franchi shoots the outdoors amazingly claustrophobically - an almost-oxymoric effect that contributes to the unsettling atmosphere of The Wild Hunt.

Audience Reviews for The Wild Hunt

This movie is FILTH. Every aspect of LARP is dragged through the gutter in this terrible depiction of LARPers. The movie implies that we are insane, never break character, lead depresing lives and then it decends into rape and real murder. Could you imagine a hockey team or a football team suddenly breaking out sledgehammers and broken hockey sticks and killing each other? Well it doesn't happen in LARP either. A realistic depiction of LARP can be found in the movie Role Models; some arrogance, some arguing but in the end, everyone is there to have fun.