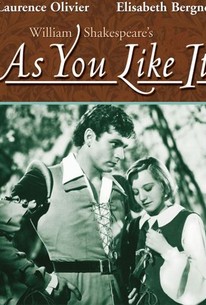 This film version of the famed Shakespearean comedy features Laurence Olivier as Orlando and Elisabeth Bergner as Rosalind. As the story goes, Rosalind, smitten by Orlando and not able to get his attention, disguises herself as a boy to more easily remain in Orlando's vicinity. Eventually Orlando grows to like his new friend and Rosalind is stuck playing a boy with a boy with whom she'd rather be a girl. Confusing? Maybe only Shakespeare could come up with the idea, but director Paul Czinner does a fine job executing the concept.

Joan White
as Phebe
View All

Regarded as a film, As You Like It is less satisfactory. There are far too many dull middle-length shots from a fixed camera, so that we might just as well be seated in the circle above the deep wide stage at Drury Lane.

It is well worth seeing and, in addition, can be recommended to teachers who want to give children an opportunity of seeing the play well acted and well spoken.

Rather bland recitation of Shakespeare notable only for an exceedingly young Olivier.

There are no featured audience reviews yet. Click the link below to see what others say about As You Like It!