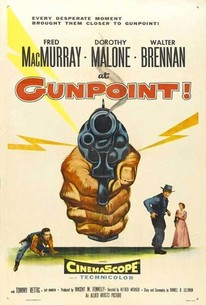 One of the best of the High Noon derivations, At Gunpoint is the story of reluctant hero Fred MacMurray. When a band of gunmen invade a small frontier town, storekeeper MacMurray fires off a lucky shot and kills the leader. Hailed as a hero, MacMurray realizes deep down that he's a coward. When the surviving gunmen return to town, thirsting for revenge, the townsfolk expect MacMurray to singlehandedly stand up to the villains. When he asks for help, his neighbors turn their backs on him, ordering him to get out of town to avoid further trouble. Only doctor Walter Brennan and MacMurray's wife Dorothy Malone remain loyal. Facing certain death,MacMurray discovers that he's not as yellow as he thought he was-a revelation that brings about a change in the rest of the town. ~ Hal Erickson, Rovi

James Griffith
as The Stranger

Byron Foulger
as Larry, the Teller

Lyle Latell
as Man in Saloon

Harry Strang
as Postmaster
View All

Critic Reviews for At Gunpoint (Gunpoint!)

An almost total ripoff of the 1952 High Noon (only reversing that film's ending as far as the town's reaction).

There are no featured reviews for At Gunpoint (Gunpoint!) at this time.