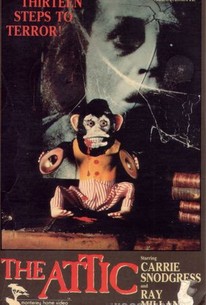 After 1970's Diary of a Mad Housewife, actress Carrie Snodgress found her career moving in frets and starts rather than barrelling ahead. By 1979, Snodgress was making do with gothic horrors like The Attic. In a variation on a theme previously explored in The Barretts of Wimpole Street and The Heiress, Snodgress plays a shy, withdrawn young woman who is totally dominated by her tyrannical father Ray Milland. At father's insistence, she remains sequestered in her attic room, denied contact with any men. When she finally breaks free, a spectacularly bloody denouement is the result.

Phil Speary
as Travel
View All

Critic Reviews for The Attic

There are no critic reviews yet for The Attic. Keep checking Rotten Tomatoes for updates!

Audience Reviews for The Attic

There are no featured audience reviews yet. Click the link below to see what others say about The Attic!