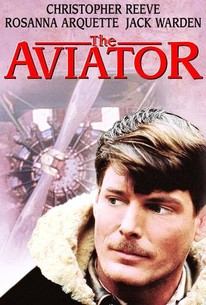 Based on a novel by Ernest Gann and set in 1928, this story starts out focusing on aviation and then flies in another direction at about three feet worth of altitude. Christopher Reeves is Edgar Anscombe, a pilot of a Stearman biplane running a mail route between the states of Washington and Nevada, when he is obliged to accept Tillie Hansen (Rosanna Arquette) as a passenger one day. Introverted at best, sullen and forbidding at worst, Edgar is struggling with his own trauma after surviving a crash that left him with an ugly scar across his face. Tillie personifies all the worse traits commonly attributed to the rich and spoiled -- and the two are set to joust from the beginning. After they take off, an accident occurs and although the dueling pair survive the crash, they are hard put to survive for long in the desolate mountains. Soon Edgar's friend Jerry (Scott Wilson) is out looking for him, and Tillie's obnoxious father is there at the base airport to put pressure on everyone to find her. Needless to say, Edgar and Tillie, in the meantime, are faced with dangers that make their previous problems seem minor. ~ Eleanor Mannikka, Rovi

Will Hare
as Old Man

Larry B. Williams
as Second Officer

Critic Reviews for The Aviator

Astoundingly dull, The Aviator should be revisited purely by enthusiasts of its two leads or those looking for a visual sleep aid.

Audience Reviews for The Aviator

There are no featured audience reviews yet. Click the link below to see what others say about The Aviator!