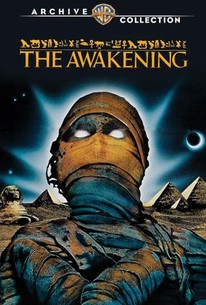 English archaeologist Matthew Corbeck (played by the emphatically-American Charlton Heston) undertakes an expedition to find the tomb of the Egyptian princess Kara, despite his awareness of a nefarious curse that is said to befall anyone who disturbs the tomb. Eighteen years after Corbeck's discovery of the burial site, his teenage daughter (who was born at the very moment of the tomb's violation) begins to behave strangely. Turns out she's been possessed by Kara's malevolent spirit, carrying out the princess's revenge by causing several deaths and developing a less-than-healthy obsession with Daddy. Based very loosely on Bram Stoker's novel The Jewel of Seven Stars (itself the inspiration for Hammer's superior Blood from the Mummy's Tomb), this is basically Warner Brothers' attempt to jump on the big-budget horror bandwagon in the wake of The Omen's staggering success. The result is a good-looking but artistically hollow film -- with elaborate sets, lush cinematography and a sweeping musical score, but little in the way of logic or suspense. ~ Cavett Binion, Rovi

Roger Kemp
as Doctor
View All

Critic Reviews for The Awakening

The Awakening doesn't create anything new. Its references to The Exorcist, among others, are obvious. [Full Review in Spanish]

Twenty-four years after he freed the Israelites, Charlton Heston returned to Egypt to insult the ancient gods again in 'The Awakening.' Let my people go -- to their Netflix queues, to request the erratic but more enjoyable 'Blood from the Mummy's Tomb.'

Funnier than most comedies

Audience Reviews for The Awakening

No surprise to me that this bombed on its release. I rented it thinking it might be a hidden 80's gem, but no such luck. The opening scene goes on forever (and is boring). Then finally it speeds up to current day when Margaret is turning 18 and the fun is expected to start. Actually, there is no fun. Boring, boring, boring. Horrible end to Dad's second wife (and while we are talking about Dad, his appearance was more creepy than anything else happening in this movie. What was that about? Those creepy stares...). Then in the final ten minutes, things finally get interesting. Then the movie stops abruptly. Can I have that hour and forty minutes back again, please?

This film version of Bram Stoker's horror novel, The Jewel of the Seven Stars, is a worthy enough effort with a strong cast and impressive locations but it's all a bit too clinical and dry to be genuinely entertaining.

An okay movie about mummies, it kind of has an "Omen" feel to it at times, and it's pretty boring in the beginning, but it gets better in the end. Overall, it's okay.

The words claptrap, junk and hokum all spring to mind when this silly possession movie is mentioned. Produced during that unfortunate period after The Exorcist hit big and every other movie was some type of scare flick this one doesn't even have a very plausible script to start with. Poor Susannah York, the most talented of the actors trapped herein, spends the beginning of this turkey in one of the most unbecoming wigs ever seen. Watch this only if you want to make fun of something.