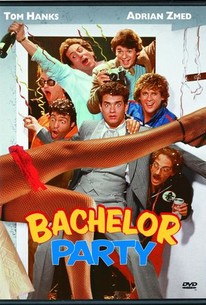 Tom Hanks stars in this raunchy teen comedy from veteran screenwriters Pat Proft and Neil Israel, who had previously collaborated on the amusing sketch film Tunnelvision (1976) and the disappointing Americathon (1980). Bus-driver Rick Gasko (Hanks) is engaged to wealthy Debbie Thompson (Tawny Kitaen), much to the chagrin of her father (George Grizzard), who considers Rick a loser. To keep an eye on her future groom, Debbie and her friends dress as prostitutes to attend his bachelor party, which quickly turns into a bacchanal of smutty debauchery. Familiar faces in the cast include action stars Michael Dudikoff and Ji-Tu Cimbuka, pin-ups Monique Gabrielle and Rosanne Katon, and teen-movie regulars Adrian Zmed and Wendie Jo Sperber. It's an occasionally hilarious excursion into bad taste, although one which two-time Oscar winner Hanks would probably like to forget.

To his credit Hanks behaves throughout as though he's actually in a worthwhile movie.

"Bachelor Party" has some great moments and qualifies as a raunchy, scummy, grungy Blotto Bluto memorial.

Mr. Hanks's suave smart-alecky manner owes a lot to Bill Murray, but he's funny and engaging even if he isn't doing anything new.

...a foul, outdated collection of filthy, entitled male-chauvinist attitudes which one would like to hope don't exist anymore...

The moviemakers find a screwball tone in the opening five minutes and stick with it throughout, always keeping the jokes coming and the performances wonderfully exaggerated.

This is tiresome, irksome and inexcusably sexist.

A smash hit teeny-bopper movie that proves again there is no accounting for taste.

Thanks to Hanks, not only is Bachelor Party still around, but it's also still worth watching.

Bachelor Party has energy to spare, plus there are some really funny supporting performances hidden within, should you care enough to dig that deeply.

Bachelor Party is a fun an entertaining movie, and this help with the friendship of Rick and his buddys. The film, stop of be so funny, just went the real party beggins. And on this point Bachelor Party, falling down. Rotten.

I know it's just a movie about some guys who have a wild bachelor party, but it's very funny, has good actors, and it's just enjoyable to watch when you're super bored. It's not a great movie, but I like it.

If you can't enjoy this movie, I don't know what could possibly please you. This is one of the best comedies out there because it wasn't afraid to go extreme and have fun, while also appealing to all kinds of viewers. It's not some dumb guy movie, it has a real heart to it that most people should be able to find relative. Tom Hanks is always great at comedic roles, I only wish he'd do more. It's a total 80s theme, but instead of being discouraging it just adds to the carefree style of the movie.

If there was a monarchy to 1980's sex comedies then Bachelor Party would be their king. This is probably one of the crudest and tasteless films outside of the porno industry ever made, but it's still funny and entertaining as hell. Oscar Winner Tom Hanks stars as Rick, a guy about to get married to Debbie (Tawny Kitaen). His buddies want to throw him a massive bachelor party that turns into a circus featuring a stripper trying to have sex with a donkey (who's hyped up on drugs) and an excursion to Chippendales to play a prank on the bridal shower by having a freakishly large version of the male anatomy in a hot dog bun. Bachelor Party is good, tasteless humor that may offend some people out there, but most will find it hilarious. Yes, some of Tom Hanks schtick does get old after awhile buy overall the film is a pretty good romp.