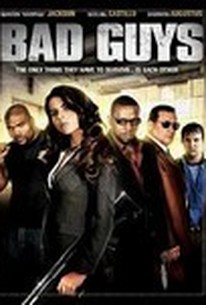 These bad guys are a couple of inept cops who, when kicked off the force, decide to make their living as professional wrestlers. They become "The Boston Bad Guys" and as such, are pitted against a wrestling team managed by their manager's arch rival. To add intrigue to this wrestling fan's release (who else would watch it?) -- are appearances by several big-name professional wrestlers.

Joan Lemmo
as Lady at Nellie's

Chuck Picerni Jr.
as Referee No. 1

Bengali
as Alfonso the Magnificent

Goliath
as The Crimson Bulldozer

Sgt. Slaughter
as Himself

Jesse Hernanadez Lizarraga
as Referee No. 2
View All

Mainly, though, the comical commotion takes place in the ring and all that is required for full foolish enjoyment is a suspension of taste and sense.

There are no featured reviews for Bad Guys at this time.