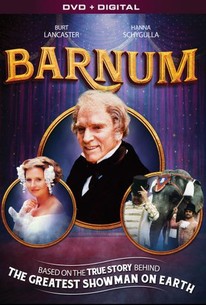 This made-for-television film chronicles the life of 19th-century American showman P. T. Barnum. Using flashbacks (and flash forwards) the earliest efforts of his career are shown, through the formation of the "Greatest Show on Earth" with his partner Bailey, with many interesting things in between. ~ Forest Ray, Rovi

Michael Sinelnikoff
as Lord in Waiting

The Royal Hanneford Circus
View All

There are no featured audience reviews yet. Click the link below to see what others say about Barnum!