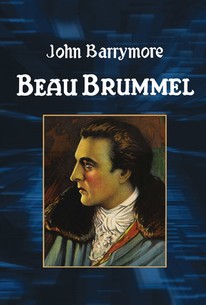 John Barrymore is virtually the entire show as 18th-century British fashion plate Beau Brummel. Thanks to his sartorial splendor and quick wit, Brummel is a favorite of the Prince of Wales (Willard Louis)--and with several ladies, though his heart belongs to the beautiful, unobtainable Lady Margery Avanley (played by 17-year-old Mary Astor, who during filming was carrying on a most passionate affair with her leading man). The arrogant Brummel falls from grace after insulting the Prince and then refusing to apologize. We last see Brummel in an asylum, dressed in rags, but with still enough pride to turn away his true love rather than allow her to throw her life away on him. John Barrymore is superb throughout, especially in the poignant sequences after his descent into poverty and disgrace.

Willard Louis
as Prince of Wales

Alec B. Francis
as Mortimer

Note the incredible range of emotions -- love, sadness, joy, hate, amusement, disdain, hurt -- Barrymore is capable of conveying, and with what economy he does it.

This romantic drama is pretty standard for tragic romance, but the actors are really good. Overall, it's just okay, there's nothing really great about it.