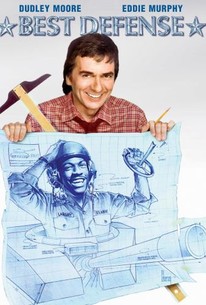 Dudley Moore and Eddie Murphy try but fail to bring this flat comedy to life, while the story itself is hampered by intercutting between the years of 1982 in Los Angeles (Moore) and 1984 in Kuwait (Murphy), with no explanation of how these two disparate people and locations are related. Wylie (Moore) is an inept engineer trying to perfect a gyro system for his employers who contract projects with the U.S. defense department. Wylie accidentally gets some blueprints for another type of gyro -- and his company successfully manufactures the part, much to almost everyone's benefit. Unfortunately, these plans are coveted by a certain ruthless industrial spy (David Rasche), and the FBI itself is suspicious about the origins of the blueprints in Wylie's hands. Meanwhile (and in constant interspersed segments), Landry (Murphy) is trying to get his tank to stay on course, but no matter what he does the machine swerves and lunges at random -- could there be a gyro at fault here?

John A. Zee
as Col. McGuinn

Rick Dees
as Himself

It really isn't easy to make a movie as mind-bendingly bad as Best Defense. It takes hard work, a very great deal of money and people so talented that it matters when they fail with such utter lack of distinction.

Try as they may, neither the cast nor the filmmakers can cover up the fact that this movie, like Moore's prototype, is a dud.

Aiming for the zaniness of Catch-22, this comedy misfires.

Disappointing, Best Defense, have a poor, but clever, screenplay, poor direction and nothing funny moments. A low point in Dudley Moore's career. It's a good film to know, but terrible to be one of your favorite. Rotten.

Let's face it, Dudley Moore's film career STANK! A film of two halves, with Moore and Murphy featuring in two different stories, neither of which are even vaguely funny.

Hideously unfunny star comedy remarkable in that the two stars never actually appear on screen together.