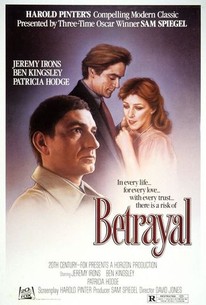 Director David Jones adapted Harold Pinter's play of the same name -- with the help of Pinter himself -- to better fit this chronologically reversed drama of love and betrayal to the medium of film. The action starts with a scene in a London pub in which Jerry (Jeremy Irons) and Emma (Patricia Hodge) hold a subtly sardonic conversation on the nature of human failings as they meet for the first time after the end of their affair. The next scene, introduced by an intertitle, details how their romance fizzled and is followed by the next vignette, one year earlier, on how Jerry broke the news to Emma's husband Robert (Ben Kingsley) that he and Emma were lovers. And so it continues, through a total of nine scenes, back to the beginning of a complex, interpersonal drama. The film benefits considerably from Kingsley and Irons as the lead males, and the backwards story is in no way hard to follow.

Not a total loss-some wit and a few well-sketched moments survive-but the betrayal here is largely one of the talent involved.

An absorbing, quietly amusing chamber drama for those attuned to Harold Pinter's way with words.

Hodge is fine, Kingsley tries his best, and Irons is as tight-assed as ever. But it's all so uncinematic as to make one wonder why it was ever made in the first place.

The "Betrayal" structure strips away all artifice. It shows, heartlessly, that the very capacity for love itself is sometimes based on betraying not only other loved ones, but even ourselves.

Though I didn't see the stage production when it was done on Broadway in 1980, this ''Betrayal'' is a riveting film that proceeds through the interlocking love lives of three special friends.

In Pinter's plays, the silences are as important as the notes; and [the actors] play the pauses with such exquisite timing, such command of detonating ambiguities, as to make the Broadway version look like a hastily assembled run-through.

Once you've grasped the reverse chronology, the events peel away in layers that produce unexpected insights along the way.

Razor sharp in its depiction of a rather precious, pretentious literary London, Pinter's own world; in fact it includes an unforgettable scene in a restaurant when Kingsley goes ballistic.

Literate dialogue and stunning performances by Irons, Kingsley (with hair) and Hodge -- along with Jones' sensitive direction -- make it a shattering experience.

Explores the strange things we do to ourselves and to others in the name of love.

Jones's photography is not overtly cinematic, but the film nevertheless succeeds in being both gripping and immensely moving cinema.

There are no featured audience reviews yet. Click the link below to see what others say about Betrayal!