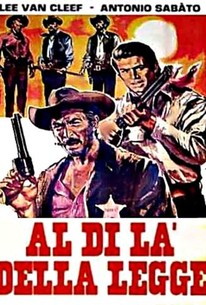 Beyond The Law Photos

Unlike Clint Eastwood, who in the 1960s was cast as the Man With No Name, Beyond the Law star Lee Van Cleef has a name, and a very functional one. Van Cleef is known to one and all as Bandit Turned Sheriff. Actually, a more appropriate cognomen would be Bandit Turned Sheriff But Still a Bandit, since Van Cleef only pretends to reform so that he can steal a cavalry payroll. Since it's hard to watch Beyond the Law with a straight face to begin with, the producers wisely decided to turn this spaghetti western into a semi-comedy. Released in Italy in 1967 as Al Di La Della Legge, Beyond the Law was distributed in the US in 1971.

Herbert Fux
as Eustaccio/Denholm
View All

Critic Reviews for Beyond The Law

A flashy Italian-German Western... with some ingenious touches.

There is a perfectly sensible massacre at the end, with Lionel Stander, here a decayed preacher, giving one of his gruesome dying performances which anyone who saw Polanski's Cul-de-Sac will remember him for.

Audience Reviews for Beyond The Law

There are no featured audience reviews yet. Click the link below to see what others say about Beyond The Law!

Beyond The Law Quotes